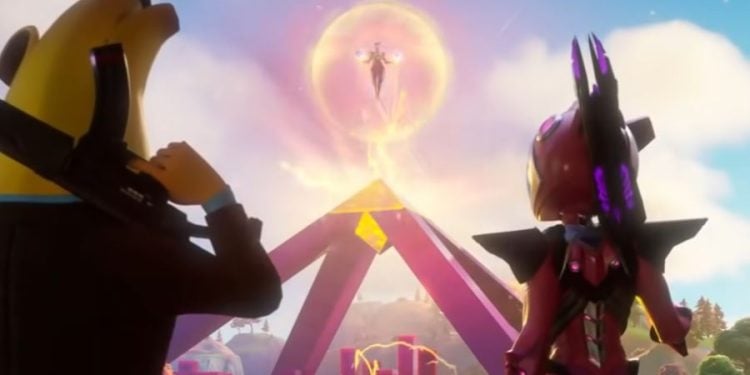 Here’s everything you need to know about the Fortnite chapter 2 Season 8 “The End” live event including the time and countdown timer.

If you’re not aware, Epic Games asked data-miners not to leak any chapter 3 information during downtime. However, the Battle Pass trailer has been leaked after Epic themselves leaked it.

Although it was quickly deleted, Fortnite players were quick to download the video and upload it on Twitter and YouTube. If you want the new chapter to be a surprise, we suggest you stay off Twitter as users have been posting the trailer as a reply to any Fortnite related tweet.

If you do want to see what’s in store for next season, we have a few articles dedicated to the leaks including a breakdown of the trailer, a look at all of the Battle Pass skins, the new map, and a certain Spider skin.

We still have the Fortnite Live event called “The End” to finish off Fortnite chapter 2 season 8 and move onto the new chapter. Here’s everything you need to know about today’s The End Fortnite Live Event including the time it’ll take place.

Check out all these chapter 3 leaks:

When is the Fortnite Live Event Time?

Today’s The End Fortnite Chapter 2 live event finale will take place at 4 PM ET (9 PM GMT, 10 PM CEST). However, you’ll want to queue for the Fortnite live event early as it’s likely there will be a limited number of players that can participate.

As this is one of the biggest Fortnite events we’ve had since the end of chapter 1, the amount of players both new and old will likely cause server issues. For that reason, we’d recommend logging into Fortnite an hour early.

Thanks to Twitter user TweaBR, we have a list of what time the Fortnite live event will take place around the world:

There’s a countdown timer in-game as well as in the lobby. However, if you’re not able to get into the game and check or you’re somehow still confused as to when the event will take place in your country, we’ve added a countdown timer below as well.

For those attending, you’ll earn two free rewards which are a loading screen and a wrap. We’ll cover the two rewards in a separate article as they’ve just been decrypted and leaked by several data-miners including the ever reliable Hypex.

After the event, there’ll be downtime similar to what we saw with the black hole event at the end of chapter 2. However, we’re not exactly sure how long it’ll last as we don’t have an official start date for the new chapter but we’ll keep you updated with the latest as always.

Be sure to attend The End if you can and I’ll see you in Chapter 3.