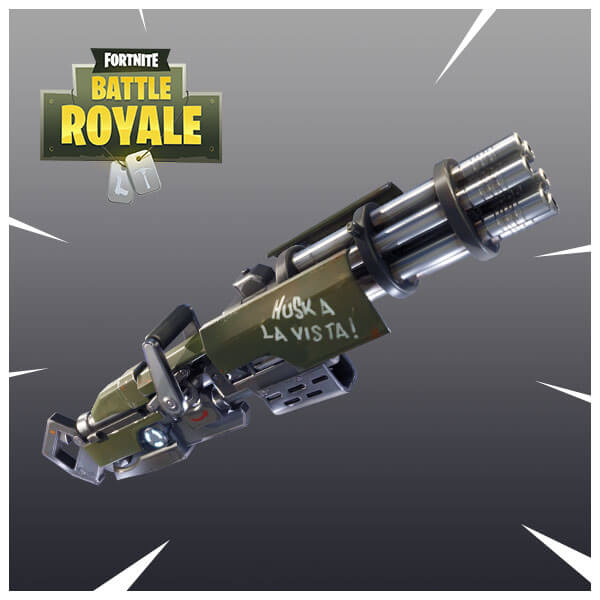 UPDATE 3: Servers are back up, update is live.

UPDATE 2: Update will be happening at 1PM EDT (6PM GMT), there WILL be downtime, and you’ll have to download an update.

Epic Games have announced today that they will be releasing V.2.4.0 patch/ Fortnite update scheduled for tomorrow.

Get ready for the new Minigun!

Efficiently eliminate your enemies with the new Minigun in our v2.4.0 Patch planned for Feb 1! *Forts Beware*

As you can see, this gun is very powerful and will be effective to use against enemy forts. Looks like this will be a good alternative to using Grenade Launchers and Rocket Launchers.

A new feature being introduced is the spectator count. There will be a small eye in the lower left corner of the screen, which shows how many active spectators there are. This feature can be disabled if you do not want to know how many people are watching.

Epic have also reduced the drop rate of the Rare Suppressed Pistol by 20% and the Legendary variant by 33%, meaning there will be less of these weapons to find.

In the previous Fortnite update, auto-run was introduced on PC and now this update has come to consoles. Auto-run can be activated by double clicking the left thumb stick on controllers.

Unfortunately, Epic Games have not fixed the building issues that many gamers are experiencing yet, however they are aware of the issues and are working on solving the problems as we speak.

You may have noticed in the patch notes that there’s no fix in to solve the building issues players have been experiencing. We are aware that some of you are being affected by these problems and are working to solve this ASAP.

To find out all the patch notes for the Fortnite update please keep reading.

Let us know what you think about the new addition of the Minigun in the comments section below.

Context Sensitive menus are live!
More options are available when interacting with items in the Hero Squad, Survivor Squads, and Armory. Schematics and people can be directly added to the Collection Book now!
Cozy Campfire