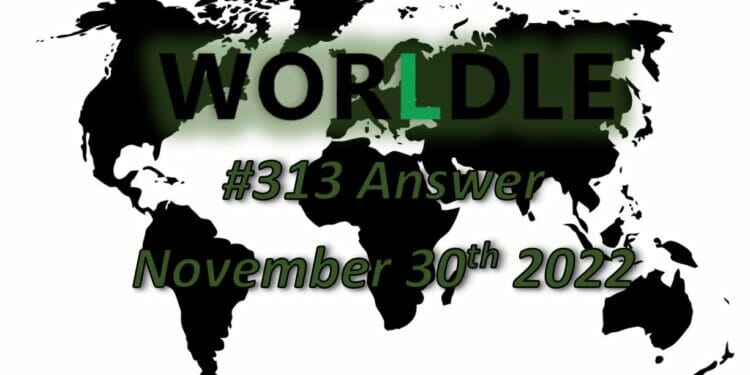 Here is the answer for the 313 Worldle country today, released on November 30th, 2022 and some hints to help you solve it.

UPDATE: Click here for the hints and the answer to Worldle 314!

Here is what the country/territory looks like for the Worldle 313 puzzle today:

The answer to the Worldle 313 country/territory today is…

FUN FACTS: Tokelau is pure Polynesian culture, as they have a pool of resources according to needs. Respect for the elderly is an integral characteristic of Tokelau culture and Tokelau language, age being which normally determines the level of employment, and older inhabitants occupying managerial positions’ Tokelau produces fine handicrafts, fabrics, such as carpets, bags, hats and fans. In Tokelau, stamps and coins are also sold as collectables. The Tokelau culture celebrates both religious and secular holidays with festivals, sports competitions and parades. Thanks to these great distances, indigenous culture has been preserved in Tokelau to a greater degree than in most places on the planet. The local speak the Tokelau language.

Tokelau is a dependent territory of New Zealand in the southern Pacific Ocean. It consists of three tropical coral atolls: Atafu, Nukunonu, and Fakaofo. They have a combined land area of 10 km2 (4 sq mi). The capital rotates yearly among the three atolls. In addition to these three, Swains Island, which forms part of the same archipelago, is the subject of an ongoing territorial dispute; it is currently administered by the United States as part of American Samoa.

What Are The Worldle 313 Bonus Answers Today?

There are three bonus rounds today and the first one is to guess the six countries that border Tokelau.

The county outlines are shown to you and here are the answers to the countries next to Tokelau below:

The second round is to guess the capital of Tokelau.

The capital city of Tokelau is…

The third and final bonus round is to guess the flag for Tokelau. There are eight options for the flags, which can be seen below:

The Tokelau flag has a blue background with a canoe in yellow and four white stars on it.

It is the sixth flag in the image with the options and you can see what it looks like below:

The canoe symbolises Tokelau’s journey towards finding the best governance structure for its people; the Southern Cross symbolises a navigational aid for the journey.  The Southern Cross has helped Tokelauan fishermen navigate the waters around Tokelau for centuries while they have fished to sustain families and villages with its riches.

The white stars of the Southern Cross are a symbol of Christianity, an important part of everyday life in Tokelau.  White also signifies the cooperation and unity among the atolls of Tokelau and a shared aspiration to secure a better life for Tokelauans.  Yellow signifies a happy, peaceful community.  Blue signifies the ocean on which Tokelauans depend for their livelihood and is also the colour of the sky which holds the stars that direct Tokelau’s people.

Tokelau’s flag has been under development for a number of years.  In 2007 a competition was held to design a new flag and the final version, approved by Tokelau’s General Fono in February this year, is based on the winning design.  As is customary for official flags of the Commonwealth, the flag was granted a Royal Licence by Her Majesty the Queen in August 2009.

Let us know in the comments section below if you managed to solve the Worldle today and if there are any other games you want us to cover. Click here for the hints and the answer to Worldle 314!