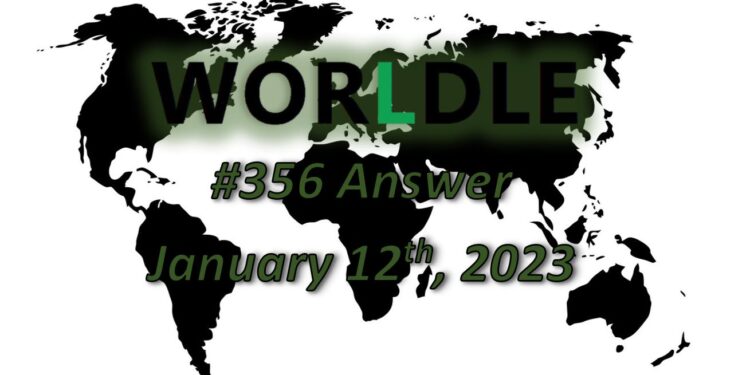 Here is the answer for the 356 Worldle country today, released on January 12th, 2023 and some hints to help you solve it.

UPDATE: Click here for the hints and the answers to Worldle 357!

Here is what the country/territory looks like for the Worldle 356 puzzle today:

The answer to the Worldle 356 country/territory today is…

FUN FACTS: Portugal is the oldest country in Europe.  In 1139, Portugal appointed King Afonso Henriques as its king. Lisbon is said to be four centuries older than Rome. Due to its excellent trading location, the Phoenicians settled in Lisbon around 1200 BC.

What Are The Worldle 356 Bonus Answers Today?

There are four bonus rounds today and the first one is to guess the three countries that border Portugal.

The county outlines are shown to you and here are the answers to the countries next to Portugal below:

The second round is to guess the capital of Portugal.

The capital city of Portugal is…

The third round is to guess the flag for Portugal. There are eight options for you to choose from and here is what the Portugal flag looks like below:

The two main colors on the flag are green and red, decided by the flag committee. They believed red symbolized the blood loss of those fighting for Portugal to become a republic. Green symbolizes hope for the future. The Portuguese flag thus represents both the past and a glimmer of hope for the future.

There is more red than green on the flag, meaning there is more “blood” than “hope”. This represents the typical Portugal view, often focusing on the past and melancholy.

The yellow armillary sphere in the Portuguese flag features a ribbon design of four rings arranged on a sphere.

A Portuguese red shield lies at the center of the flag, on top of the armillary sphere. The whole shield represents Portuguese victories of the past.

The fourth and final round is to guess the population and currency of Portugal and the answers are:

Let us know in the comments section below if you managed to solve the Worldle today and if there are any other games you want us to cover. Click here for the hints and the answers to Worldle 357!