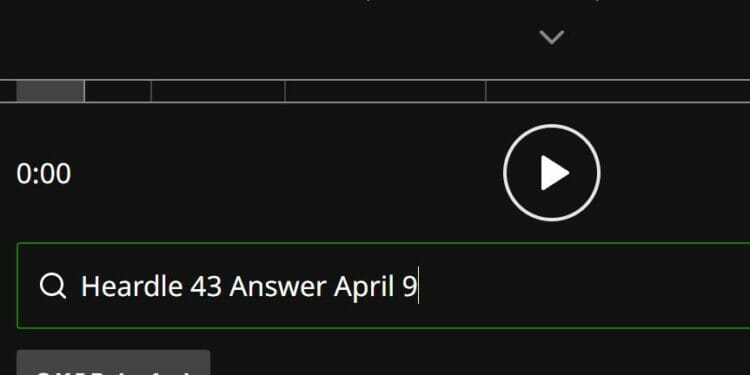 Heardle fans are looking for some help in their attempt to conquer song 43, released on April 9, 2022. Here are our hints along with the answer to help you out.

Looking at stats sites like Similar Web, it appears as though Heardle is in the top five most popular daily games right now. Wordle obviously tops that list, but surprisingly, Worldle is also on that list.

Heardle was only released six weeks ago but was quick to gain a large player base thanks to its unique spin on Wordle. If you’ve never played before, the game tasks players with guessing the song of the day in six attempts or less.

The game starts off by giving players an intro to the song. Most of the time, it’s not enough to correctly guess the song of the day. To unlock more of the intro, players need to submit or skip a guess.

There’s a maximum of six sections of the intro you can listen to before you fail the Heardle song of the day. On most days, it’s fairly simple to guess the song without any issues.

However, some players might struggle if they’ve never heard the song before. For that reason, we provide hints along with the answer for those of you that don’t want to lose your perfect win streak. Below, you’ll find everything you need to conquer Heardle 43m released on April 9, 2022.

Here are our hints for Heardle 43:

The answer to Heardle 43, released on April 9th, 2022 is Luther Vandross – Never Too Much.