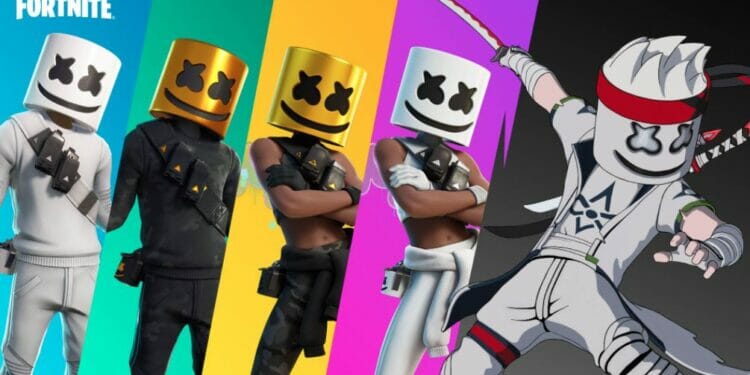 A new set has just been announced by Epic Games which adds to the Marshmello Skin in Fortnite. Here are the new skins and release date for the Melloverse Skins.

Epic Games are known for pushing the boundaries in Fortnite Battle Royale and managing to secure the most collaborations with huge brands and popstars than any other game. Fortnite is still as successful as ever and the player base seems to keep expanding with the never-ending list of collaborations.

Not all of the collaborations Epic have partnered with have changed anything in-game but one of the first successful in-game events to take place in the game was with Marshmello where there was a full concert that took place in Pleasant Park, 3 years ago! (2nd February 2022). Since then, we have seen the likes of Travis Scott and Ariana Grande hosting their own concerts in-game as well.

Epic have now officially announced they will be collaborating with Marshmello again and are introducing the Melloverse to Fortnite. There will be a ‘Welcome to the Melloverse Set’ you will be able to purchase in the Item Shop for V-Bucks starting from February 1st, 2022, at 7 PM ET / Midnight GMT.

There are brand new Skins that will be featured in this collaboration and the first Skin you will see is the Marsha Skin which comes with a Toasted Skin Style. The Marsha Skin will also come with the Mella Back Bling and you can also purchase the Mello Glo Pickaxe as part of the set. Here is what they look like:

The Marshinobi Skin is a Mello Mello Master and this Skin will come with the Shockwave Blades Back Bling. The Pickaxe to be featured with this set is called the Shockwave Blade Pickaxe! Not only that, there is a new Mello Emote called the Maximum Bounce Emote, which will have Marshmello music (of course) and will feature dance moves by josh3thousand. You can see what these cosmetics look like in the image below:

How to Vote for Marshmello Lobby Track

These cosmetics are not the only Marshmello cosmetics we will get, but Epic need your help to decide what Marshmello track will be featured in Fortnite as a future Lobby Track! So how can you help? Epic and Marshmello are asking you to vote for the Lobby Track you want in the game by choosing between two songs that’ll be featuring in Marshmello’s upcoming album Joytime IV. All you need to do is click on the following link in order to cast your vote: vote.marshmellomusic.com

There are two tracks you can vote for, which are ‘BeFoRe U’ and ‘ReMiNiSce’. On the website you can choose which track you want to be featured in the game as a Lobby Track and then all you will need to do is submit your name and email address for your vote to be counted.