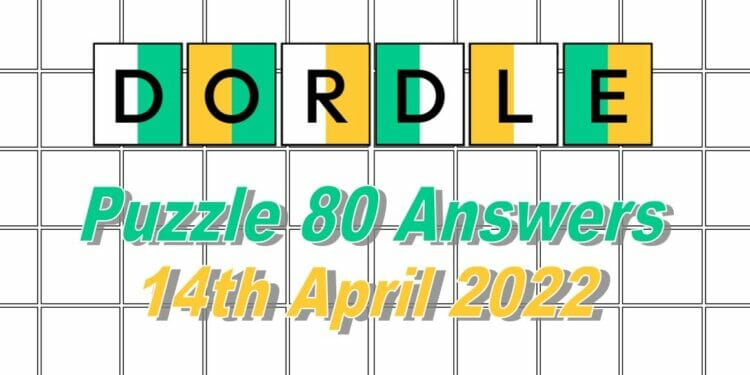 UPDATE: Click here for the hints and the answers to Dordle 81!

Some Dordle puzzles may be more difficult to solve than others, so here are some hints we have to help you solve the Dordle #80 words today.

Hint 1: There is one common letter in the Dordle words today, which is an I.
Hint 2: There are two vowels in both words today.
Hint 3: The first word begins with an M and the second one begins with a V.
Hint 4: The first word means having or apparently having supernatural powers and the second Dordle word is a movable part of a helmet that can be pulled down to cover the face.

Here is how I managed to solve the words for Dordle 80 today. First I guessed the word ‘AUDIO’, which placed the I in the correct place in the first word as well as showing me there is an A in the word. It also revealed that there is an I and O in the second word. As there are two vowels that have been found for both words, I figured these are likely the only ones in the word.

I then guessed the word ‘MOIST’ to see if I could reveal any more letters in the words as well as placing the I and O in the second word. Unfortunately, no more letters were placed correctly in the second word, but I did know there is a letter S in it. It also placed the M in the correct place for the first word, so I decided to focus on the word and guessed the word ‘MANIC’ next.

This was a great guess as it placed the A, I and C in the correct positions, leaving only the middle letter. This made it very easy to guess the first word of the Dordle 80 puzzle, which is…

As no letters had been placed in the second word, I decided to guess a word that had an E in it, just in case there is one in the word, as well as using a word that uses different letters from the ones I had used already so I guessed the word ‘VIPER’.

This was a great guess as it placed the V, I and R in the correct positions, leaving just the third and fourth letter to be guessed. This made it very easy to guess the answer to the second word of Dordle 80 as I already knew the letters that needed to be put in this space, which is…

Well done if you managed to guess one or two of the words correctly! Click here for the hints and the answers to Dordle 81!