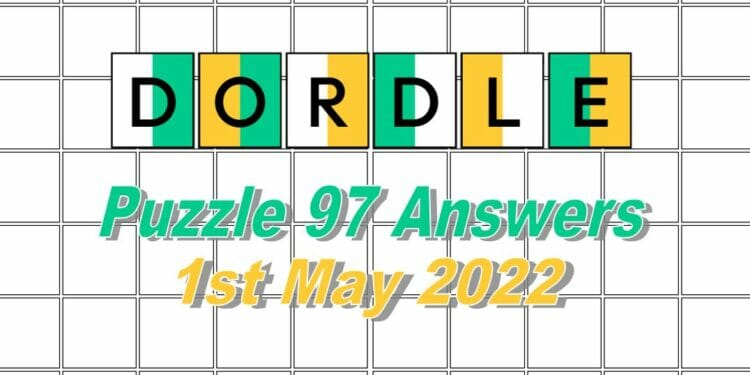 UPDATE: Click here for the hints and the answers to Dordle 98!

Some Dordle puzzles may be more difficult to solve than others, so here are some hints we have to help you solve the Dordle #97 words today.

Hint 1: There are two common letters in the Dordle words today, which are C and O.
Hint 2: There is onw vowel in the first word and two in the second.
Hint 3: The first word begins with a C and the second one begins with a T.
Hint 4: The first word is to make the spontaneous sounds and movements of the face and body that are the instinctive expressions of lively amusement and sometimes also of derision. The second Dordle word is a short story, typically with animals as characters, conveying a moral.

Here is how I managed to solve the words for Dordle 97 today. First I guessed the word ‘AUDIO’, which showed me that there is a U in the second word and an O in both words today.

I then guessed the word ‘BLERT’ as the letters in this word have not been used before. This was a good guess as it placed the L in the correct position for the first word and also showed me that there is a T in the second word.

The next word I guessed is ‘SLOWS’ as this places the O in a different position for both words. This guess placed the O and W in the correct places in the first word, which only leaves the first and last letter to be guessed.

I decided to focus on the first word and guessed the word ‘FLOWN’ next, which placed the N correctly. This made it a lot easier to guess the answer for the first word of Dordle 97, which is…

I know there is a C, U, O and T in the second word. The O and U are likely together, which would mean the O will have to be the second letter and the U will be the third. I then thought that the word could be the first letter, which meant the C was probably the fourth letter. This helped me to solve the answer to the second word of Dordle 97, which is…

Well done if you managed to guess one or both of the words correctly! Click here for the hints and the answers to Dordle 98!