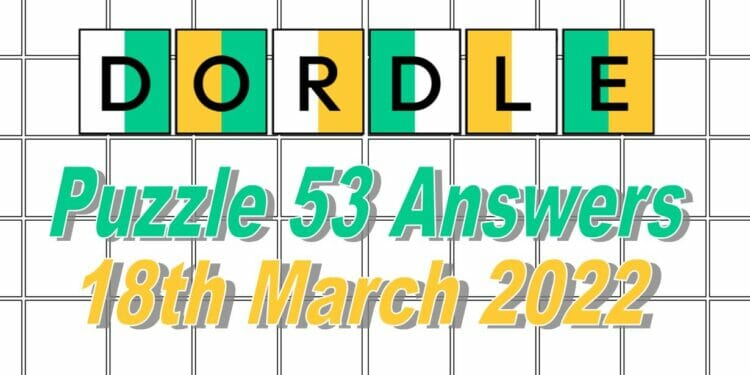 UPDATE: Click here for the hints and answers to Dordle 54!

Dordle is the same as Wordle but instead of guessing one five-letter word, you need to guess two. The original Wordle game allows you to make up to six guesses to solve the word, but Dordle only gives you seven to guess both words. This is what can trip people up as you can get caught up with trying to solve one word and forgetting about the other.

The best way to play this game is to try to establish the vowels in both words as soon as possible and this eliminates many potential words. If there is a word that you have guessed the majority of the letters for but there are multiple answers it could be, try to leave it and focus on the other word instead.

The reason for this is you may waste too many guesses on that word and not have enough for the second word. You never know, you could guess the letters needed on the other word, which will give you the answer for the first.

There may be puzzles that are a little harder to solve so here are some hints we have to help you solve the Dordle #53 words today.

Here is how I managed to solve the Dordle 53 words today. As usual, I started with the word ‘AUDIO’ which showed me there was an A in both words. There is also an O in the second word and the D was placed in the correct place for the first word. I then decided to guess the word ‘PEDAL’ to see if there was an E in any of the words and also to see if I could place the A’s.

This was a great guess as it placed the E, A and L in the correct place for the first word, so I decided to make another guess to solve the answer to the first word of Dordle 53, which is…

I still was no where closer to knowing what the second word is, so I decided to guess the word ‘COAST’. This placed the C and O in the correct positions, but I still did not know where the A was. The second guess I made wasn’t a good guess, ‘COWAN’, as it placed the A in the same place I already knew it wasn’t in and the other letters unfortunately were not in the answer either.

I did manage to guess the answer to the second word of Dordle 53 on my next guess, which is…

Well done if you managed to guess both the words correctly today! Click here for the hints and answers to Dordle 54!