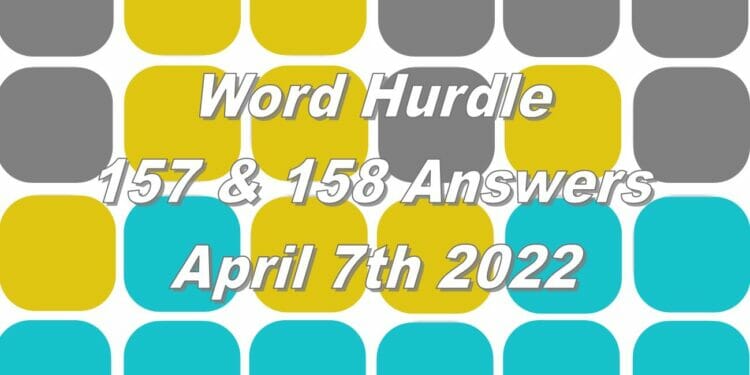 UPDATE: Click here for the hints and the answers to Word Hurdle 159 and 160!

Here are some hints we have for Word Hurdle 157 to help you to complete the word for today.

Hint 1: Contains the letter R.
Hint 2: It starts with the letter L.
Hint 3: There are two vowels in the word today (one letter repeated).
Hint 4: There is a double letter in this word and a repeated letter.
Hint 5: A written, typed, or printed communication, sent in an envelope by post or messenger.

Here is how I solved the answer to Word Hurdle 157 today, which took me all six guesses today! The first word I used was ‘AUDIOS’ (as per usual) but unfortunately, none of the letters are in the answer! This means there has to be at least one E in the answer, but question is how many?

I decided to guess a word that has three E’s in it, just to see how many there are in the word, so I used the word ‘REDEEM’ next, even though I already know there is no D in the answer. This guess placed both E’s in the word in the correct places and showed me there is an R in the word.

The next word I guessed was ‘NETHER’ as this uses letters I have not previously guessed and places the R in a different position. This was a great guess at it placed the T and R in the correct places, leaving only to letters to fill in. I then guessed the word ‘BETTER’.

This was also a great guess as it placed the other T in the correct position, leaving only the one letter, which leaves multiple possibilities for the answer. Because of this, I guessed the word ‘FLAPPY’ to see if the remaining letter is an F, L, or P. This word showed me there is an L in the word, which means the answer to Word Hurdle 157 is…

Here are some hints we have for Word Hurdle 158, released in the afternoon of April 7th, to help you to complete the word for today.

Hint 1: Contains the letter S.
Hint 2: It starts with the letter P.
Hint 3: There are two vowels in the word today.
Hint 4: This is a human being regarded as an individual.

I managed to solve the Word Hurdle 158 word in three guesses today and here is how I managed to get the answer. Again, I started with the word ‘AUDIOS’ and this was a great guess as it showed me there is an S in the word as well as placing the O correctly.

I then decided to guess the word ‘SPOKNE’ as it puts the S in a different position and it allows me to use all different letters than previously guessed, even though I know it is not the answer as the O is not in the correct position.

This was an amazing guess as it showed me there is a P and E in the word and also placed the N in the correct position at the end of the word. This helped me to easily guess the answer to Word Hurdle 158, which is…

Well done if you managed to guess one or both of the Word Hurdle words correctly today! Click here for the hints and the answers to Word Hurdle 159 and 160!