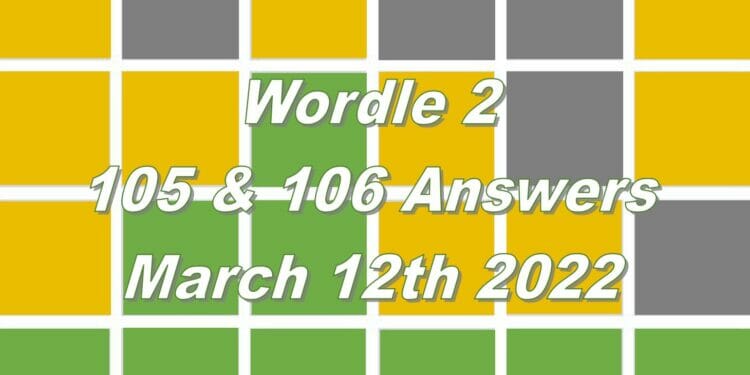 Wordle 2 is a word game where the aim is to guess the six-letter word in six guesses or less. The rules are the same as the original Wordle where no clues are given to you at the start and all the guesses you make have to be words in the American English language. Once you have made a guess, the tiles will change colour, which shows you if you have guessed a correct letter and if you have placed it in the correct position.

We also cover both of the answers in this article, so make sure you scroll slowly if you do not want the afternoon answer to be revealed to you if it has not been released in your time zone yet.

Here are some hints we have for Wordle 2 #105 to help you to complete the word for today.

Hint 1: Contains the letter T.
Hint 2: It starts with the letter D.
Hint 3: There are two vowels in the word today (one repeated).
Hint 4: A medically trained professional.

Here is how I managed to guess the answer to Wordle 2 #105 that was released on the morning of March 12th, 2022 in four guesses. I started with the word ‘REMUDA’, which unfortunately was not a great guess today as it only showed me there was an R and D in the word, but there are no E’s, U’s, or A’s in the word.

I then decided to guess the word ‘DROIDS’ to show which vowels were in the word and if I could place the other two letters I knew. This word showed me there was only an O for vowels in the word and placed the D at the start of the word, but I still did not know where the R was placed.

For my next guess, I went with ‘DOPIER’ even though I knew there were no I’s or E’s, I wanted to see if I could get any other letters placed and see if there was a P in the word. I did manage to place the O and R in the correct places, but no other letters. I then looked at what I had and realised that there had to be another O in the word and then the answer to Wordle 2 #105 clicked, which is…

Here are some hints we have for Wordle 2 #106, released in the afternoon of March 12th, to help you to complete the word for today.

Hint 1: Contains the letter L.
Hint 2: It starts with the letter M.
Hint 3: There are three vowels in the word today, none of which are repeated.
Hint 4: It’s independent units that can be used to construct a more complex structure.

Again I started with the word ‘REMUDA’ as this word has three vowels in it and for the afternoon word, it worked very well as it placed the U in the correct position and also showed me there was an E, M, and D in the word, which means I only has two letters that I didn’t know. I couldn’t think of many words that had U as the fourth letter, so I went with ‘SEDUCE’ which did not contain the M.

This word did help me to place the D and the E in the correct places and also showed me there were no more E’s in the word. I then realised I hadn’t checked to see if there was an O or I in the word yet, so I tried to think of words that have the D, U, and E in the positions that I knew and then the answer to Wordle 2 #106 came to me on my next guess, which is…

Well done if you managed to guess both the answers correctly today!