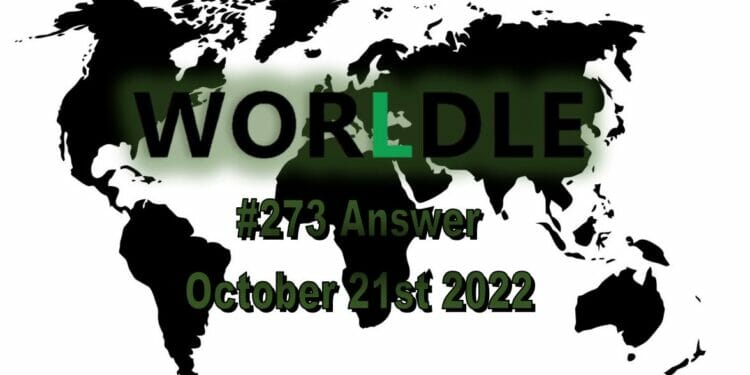 Here is the answer for the 273 Worldle country today, released on October 21st, 2022 and some hints to help you solve it.

UPDATE: Click here for the hints and the answer to Worldle 274!

Here is what the country/territory looks like for the Worldle 273 puzzle today:

The answer to the Worldle 273 territory today is…

FUN FACTS: Vietnam is actually a combination of two words, Viet and Nam, both of which predate the common era by at least a thousand years
While nobody can put an exact date on when these words came to describe Vietnam, it’s well accepted that in ancient Chinese, ‘Viet’ was used to describe a group of people from outside the country’s borders and ‘Nam’ meant to the south. So in the Chinese language, Viet Nam would’ve meant the people to the south.

However, in ancient Vietnamese, ‘Viet’ is used to refer to fairies and dragons. Scholars believe this is referencing how the Vietnamese people came into being. According to legend, they are descended from dragons and fairies!

Even though it’s been used for thousands of years, Vietnam only became the official name of the country in 1804, during the Nguyen dynasty.

Today, the two word variant of Vietnam is used by Vietnamese nationals, neighbouring countries and even the UN. It’s only in western writing that we use the single word Vietnam.

Let us know in the comments section below if you managed to solve the Worldle today and if there are any other games you want us to cover. Click here for the hints and the answer to Worldle 274!