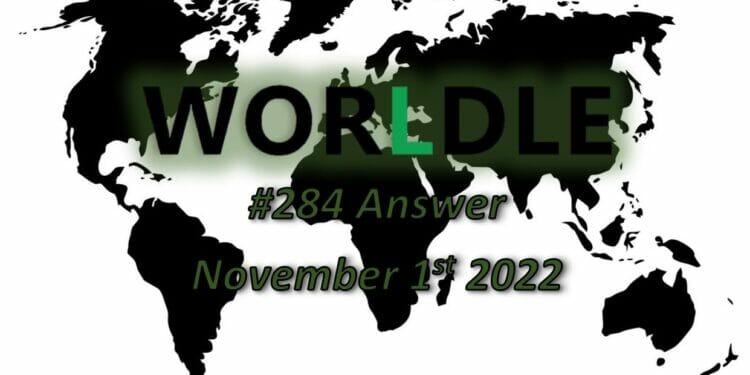 Here is the answer for the 284 Worldle country today, released on November 1st, 2022 and some hints to help you solve it.

UPDATE: Click here for the hints and the answers to Worldle 285!

Here is what the country/territory looks like for the Worldle 284 puzzle today:

Here are the clues we have for the Worldle today (November 1st, 2022).

The answer to the Worldle 284 country/territory today is…

The meteorite that wiped out dinosaurs 65 million years ago hit the Mexican peninsula of Yucatán. A 180 square meters crater with a depth of more than 600 meters was left behind. Employees of the state oil company PEMEX discovered the crater in 1981 while drilling an oil well.

What Are The Worldle 284 Bonus Answers Today?

There are three bonus rounds today and the first one is to guess the three countries that are border Mexico.

The county outlines are shown and the answers to these can be seen below:

The second bonus question is to guess the capital of Mexico.

The capital city of Mexico is:

Not sure why Worldle does not have Mexico City as the answer as CIUDAD DE MÉXICO is Mexico City in English.

The third and final bonus round is to guess the flag for Mexico. There are eight options for the flags, which can be seen below:

The answer is the flag with the green, white and red stripes with the coat of arms in the middle. This is the sixth flag shown in the image above.

The three colors of the Mexican flag contribute to the overall character of the country it symbolizes. The green part means hope and prosperity, the white part signifies purity, while the red part stands for the blood that was shed by the heroes of Mexico over the years.

Previously, however, the colors stood for other things. The color green was for independence, the color white was a symbol of the Roman Catholic religion, while the red color stood for the union formed by the Mexicans and Spaniards.

The eagle is part of the Mexican coat of arms. Its presence is based on a legend in which Huitzilopochtli, the supreme deity of the Aztecs, commanded the people to live in a place where an eagle lands on a cactus whilst holding on a snake. The Aztec people wandered until, in 1345, they found eagle perched on a cactus and eating a snake on an island within Lake Texcoco. They settled down and built the city of Tenochtitlan, which means the “Place of the Prickly Pear Cactus.” This was the most important city of the Aztecs until it was destroyed by the Spaniards when they invaded in 1521. Mexico City was built from the ruins of the ancient city.

The eagle, as well as the rest of the emblem, is actually a symbol of the Mexicans’ Aztec heritage. Even the flag colors have their own origins. At the beginning of the 19th century Mexico fought for its independence from Spain, and a coalition army was formed of rebels and some Spanish troops and was called the Ejercito Trigarante, or the Army of the Three Guarantees. Throughout the war, this army was represented by a flag with green, white, and red colors. The colors were preserved on the flag’s present design in order to remember the struggles of the Mexican people as they fought for their independence.

Let us know in the comments section below if you managed to solve the Worldle today and if there are any other games you want us to cover. Click here for the hints and the answers to Worldle 285!