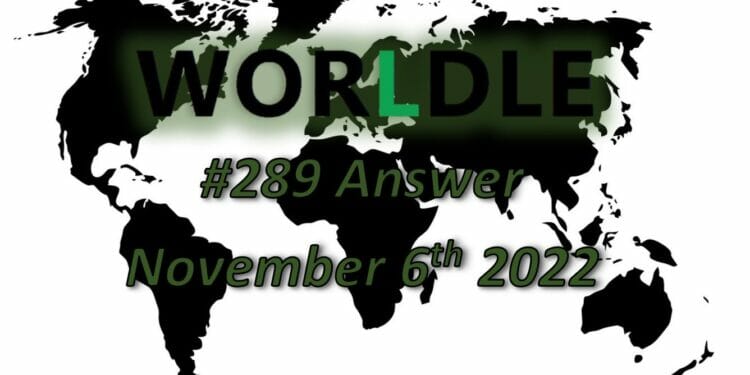 Here is the answer for the 289 Worldle country today, released on November 6th, 2022 and some hints to help you solve it.

UPDATE: Click here for the hints and the answer to Worldle 290!

Here is what the country/territory looks like for the Worldle 289 puzzle today:

Here are the clues we have for the Worldle today (November 6th, 2022).

The answer to the Worldle 289 country/territory today is…

FUN FACT: One of the most interesting facts about Jordan history and culture is that it’s home to more than 100,000 archaeological and religious sites. From the iconic Rose City of Petra and the ancient Roman wonders of Jerash to the UNESCO-listed natural area of Wadi Rum, known as the Valley of the Moon, Jordan is brimming with treasures.

What Are The Worldle 289 Bonus Answers Today?

There are three bonus rounds today and the first one is to guess the five countries that border Jordan.

The county outlines are shown but unfortunately today, there is an image that isn’t showing. Here are the answers to the bordering countries below:

The second bonus question is to guess the capital of Jordan.

The capital city of Jordan is:

The third and final bonus round is to guess the flag for Jordan. There are eight options for the flags, which can be seen below, but the fifth image has glitched unfortunately and doesn’t show what it is:

The answer is the flag with three stripes in black, white and green with a red triangle on the left side. This flag is very similar to the flag of Palestine, with the only difference being that the red triangle has a white star in it.

The flag of Jordan, officially adopted on 16 April 1928, is based on the 1916 flag of the Arab Revolt against the Ottoman Empire during World War I. The flag consists of horizontal black, white, and green bands that are connected by a red chevron. The colours are the Pan-Arab Colors, respectively representing the Abbasid (black band), Umayyad (white band), and Fatimid or Rashidun caliphates (green band). The red chevron is for the Hashemite dynasty, and the Arab Revolt.

In addition to the bands and chevron, a white star with seven points is featured on the hoist side of the red chevron. The star stands for the unity of the Arab people; its seven points refer to the seven verses of Al-Fatiha as well as the seven hills Amman was built on.

Let us know in the comments section below if you managed to solve the Worldle today and if there are any other games you want us to cover. Click here for the hints and the answer to Worldle 290!