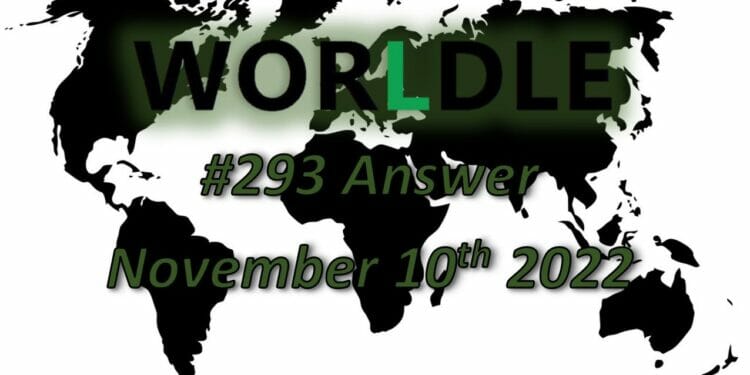 Here is the answer for the 293 Worldle country today, released on November 10th, 2022 and some hints to help you solve it.

UPDATE: Click here for the hints and the answers to Worldle 294!

Here is what the country/territory looks like for the Worldle 293 puzzle today:

The answer to the Worldle 293 country/territory today is…

Romania is a country located at the crossroads of Central, Eastern, and Southeast Europe. It borders Bulgaria to the south, Ukraine to the north, Hungary to the west, Serbia to the southwest, Moldova to the east, and the Black Sea to the southeast. It has a predominantly temperate-continental climate, and an area of 238,397 km2 (92,046 sq mi), with a population of around 19 million. Romania is the twelfth-largest country in Europe and the sixth-most populous member state of the European Union. Its capital and largest city is Bucharest, followed by Iași, Cluj-Napoca, Timișoara, Constanța, Craiova, Sibiu, Brașov, and Galați.

What Are The Worldle 293 Bonus Answers Today?

There are three bonus rounds today and the first one is to guess the five countries that border Romania.

The county outlines are shown to you and here are the answers to the countries near Romania below:

The second round is to guess the capital of Romania.

The capital city of Romania is…

The third and final bonus round is to guess the flag for Romania. There are eight options for the flags, which can be seen below:

The answer is the flag with the blue, yellow and red stripes, which is the sixth flag shown in the image above.

The colours stand for the three historical provinces of Romania. The current design was made official in 1994, but the flag has been used since 1989. The first design of the flag was in 1834, but the three colours date from the sixth century.

Let us know in the comments section below if you managed to solve the Worldle today and if there are any other games you want us to cover. Click here for the hints and the answers to Worldle 294!