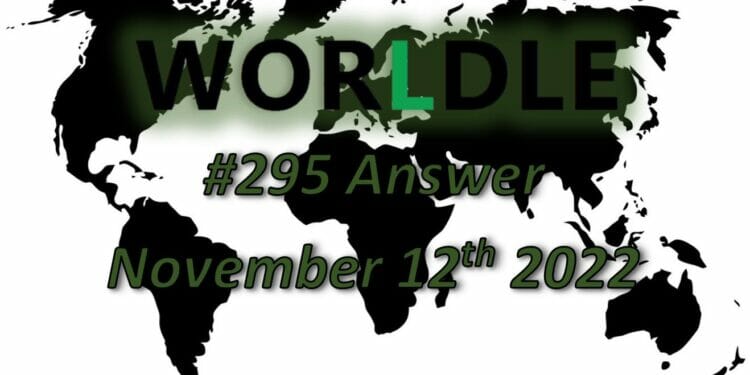 Here is the answer for the 295 Worldle country today, released on November 12th, 2022 and some hints to help you solve it.

UPDATE: Click here for the hints and the answers to Worldle 296!

Here is what the country/territory looks like for the Worldle 295 puzzle today:

The answer to the Worldle 295 country/territory today is…

FUN FACTS: A very famous celebrity who is from Malaysia is Jimmy Choo.

East Malaysia shares land and maritime borders with Brunei and Indonesia and a maritime border with the Philippines and Vietnam. Kuala Lumpur is the national capital, largest city and the seat of the legislative branch of the federal government. The nearby planned capital of Putrajaya is the administrative capital, which represents the seat of both the executive branch and the judicial branch of the federal government.

With a population of over 32 million, Malaysia is the world’s 45th-most populous country. The southernmost point of continental Eurasia is in Tanjung Piai. In the tropics, Malaysia is one of 17 megadiverse countries, home to numerous endemic species.

What Are The Worldle 295 Bonus Answers Today?

There are three bonus rounds today and the first one is to guess the three countries that border Malaysia.

The county outlines are shown to you and here are the answers to the countries next to Malaysia below:

The second round is to guess the capital of Malaysia.

The capital city of Malaysia is…

The third and final bonus round is to guess the flag for Malaysia. There are eight options for the flags, which can be seen below:

The answer is the flag with the white and red stripes with a blue rectangle box in the top left corner, which has a gold crescent and star in it. This is the third flag in the image above.

Malaysia’s national flag, the Jalur Gemilang, was designed by a 29-year old architect who entered the flag design competition in 1947. However, upon winning the competition, the flag’s star was changed to a 14-pointed one as the original was only a five-pointed one. The flag’s red and white alternating stripes, as well as the 14-point star, represent the 14 states in the country, whilst the crescent represents Islam, the country’s state religion.

Let us know in the comments section below if you managed to solve the Worldle today and if there are any other games you want us to cover. Click here for the hints and the answers to Worldle 296!