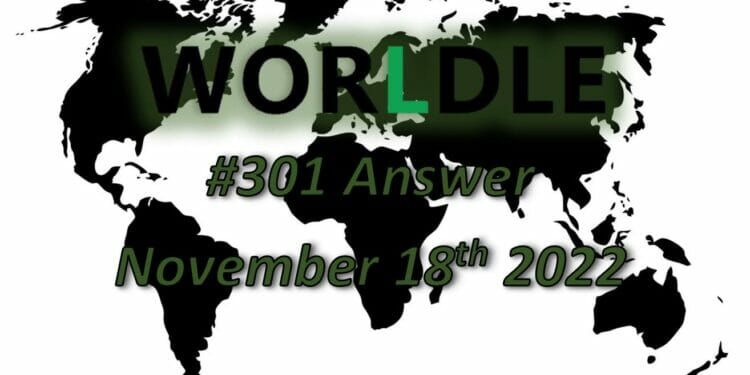 Here is the answer for the 301 Worldle country today, released on November 18th, 2022 and some hints to help you solve it.

UPDATE: Click here for the hints and the answers to Worldle 302!

Here is what the country/territory looks like for the Worldle 301 puzzle today:

The answer to the Worldle 301 country/territory today is…

FUN FACTS: According to the World Health Organization, Lebanon is ranked third in the world for the highest cigarette consumption per capita. The minimum age to smoke or purchase tobacco is 18 years and around 1.1 million over-18s currently smoke in the country. It may have banned smoking in enclosed public spaces, but the law enables hotels to allocate 20% of their capacity for smokers. The government also banned tobacco advertising in television, radio, print media, and point of sale in 2012. Since then smoking has decreased by 34.7%.

Lebanon, officially the Republic of Lebanon or the Lebanese Republic, is a country in Western Asia. It is location at the crossroads of the Mediterranean Basin and the Arabian hinterland has contributed to its rich history and shaped a cultural identity of religious diversity. It is part of the Levant region of the Middle East. Lebanon is home to roughly six million people and covers an area of 10,452 square kilometres (4,036 sq mi), making it the second smallest country in continental Asia. The official language of the state is Arabic, while French is also formally recognized; the Lebanese dialect of Arabic is used alongside Modern Standard Arabic throughout the country.

What Are The Worldle 301 Bonus Answers Today?

There are three bonus rounds today and the first one is to guess the two countries that border Lebanon.

The county outlines are shown to you and here are the answers to the countries next to Lebanon below:

The second round is to guess the capital of Lebanon.

The capital city of Lebanon is…

The third and final bonus round is to guess the flag for Lebanon. There are eight options for the flags, which can be seen below:

The answer is the flag that has a red band at the top and bottom of flag and a white band in the middle which has a green tree on it.

The red bands symbolize blood shed for liberation, the white band denotes peace, the snow of the mountains, and purity; the green cedar tree is the symbol of Lebanon and represents eternity, steadiness, happiness, and prosperity.

Let us know in the comments section below if you managed to solve the Worldle today and if there are any other games you want us to cover. Click here for the hints and the answers to Worldle 302!