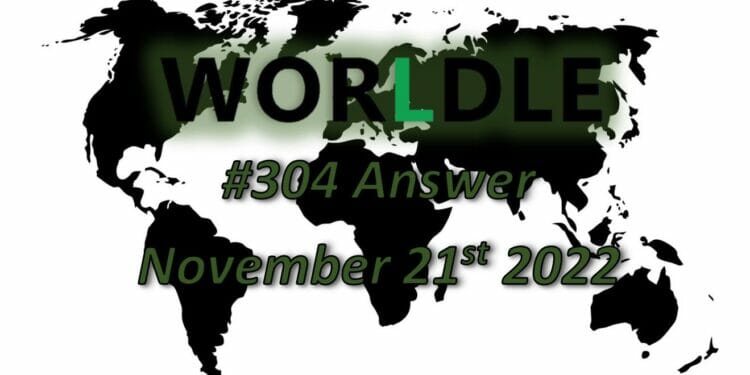 Here is the answer for the 304 Worldle country today, released on November 21st, 2022 and some hints to help you solve it.

UPDATE: Click here for the hints and the answer to Worldle 305!

Here is what the country/territory looks like for the Worldle 304 puzzle today:

The answer to the Worldle 304 country/territory today is…

FUN FACTS: Kavachi is an underwater volcano that is situated in the Solomon Islands.

Kavachi is one of the most active submarine volcanoes in the south-west Pacific Ocean. Located south of Vangunu Island in the Solomon Islands, it is named after a sea god of the New Georgia Group islanders, and is also referred to locally as Rejo te Kavachi (“Kavachi’s oven”).

Solomon Islands is an island country consisting of six major islands and over 900 smaller islands in Oceania.
The country takes its name from the Solomon Islands archipelago, which is a collection of Melanesian islands that also includes the North Solomon Islands, but excludes outlying islands, such as the Santa Cruz Islands and Rennell and Bellona.

What Are The Worldle 304 Bonus Answers Today?

There are three bonus rounds today and the first one is to guess the five countries near the Solomon Islands. Unfortunately, one of the outlines of the countries has not loaded.

The county outlines are shown to you and here are the answers to the countries near the Solomon Islands below:

The second round is to guess the capital of the Solomon Islands.

The capital city of the Solomon Islands is…

The third and final bonus round is to guess the flag for the Solomon Islands. There are eight options for the flags, which can be seen below:

The answer is the flag that has a blue and green triangle, separated by a yellow line. There are also five white stars in the top left side of the flag on the blue triangle.

The diagonal yellow stripe stands for the sun and divides the background into two triangles. The lower (green) triangle stands for the trees and crops of the fertile land. The upper (blue) triangle indicates the importance of water for the islands—rivers and rain as well as the surrounding ocean.

The five white stars on the blue originally stood for the five districts (provinces) into which the country was divided, but the number of stars did not change when additional provinces were created.

Let us know in the comments section below if you managed to solve the Worldle today and if there are any other games you want us to cover. Click here for the hints and the answer to Worldle 305!