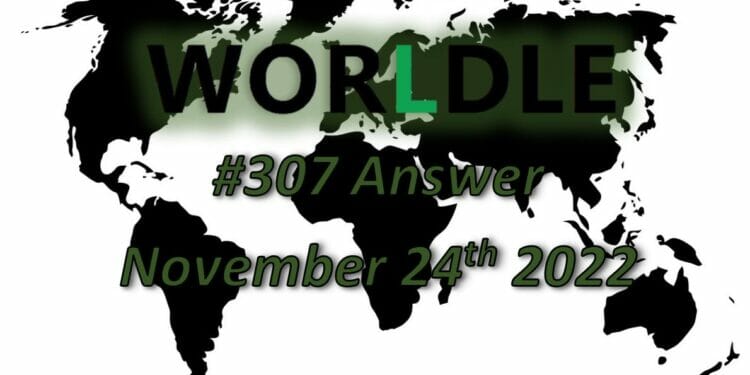 Here is the answer for the 307 Worldle country today, released on November 24th, 2022 and some hints to help you solve it.

UPDATE: Click here for the hints and the answer to Worldle 308!

Here is what the country/territory looks like for the Worldle 307 puzzle today:

The answer to the Worldle 307 country/territory today is…

FUN FACTS: Although Bolivia is one of South America’s Spanish speaking countries, this is not the only language that is widely spoken in the country. The 2009 constitution lists 37 languages in total, some of which are now extinct.

All indigenous languages are officially recognised, with Quechua being the most widely spoken. As well as Quechua which is predominantly spoken in the Andes, Chiquitano is mainly spoken in the Santa Cruz department, Guaraní on the border with Paraguay and Aymara in the Altiplano.

Bolivia, officially the Plurinational State of Bolivia, is a landlocked country located in western-central South America.

What Are The Worldle 307 Bonus Answers Today?

There are three bonus rounds today and the first one is to guess the five countries next to Bolivia.

The county outlines are shown to you and here are the answers to the countries next to Bolivia below:

The second round is to guess the capital of Bolivia.

The capital city of Bolivia is…

The third and final bonus round is to guess the flag for Bolivia. There are eight options for the flags, which can be seen below:

The Bolivia flag has three stripes which are red, yellow and green. The yellow stripe has a coat of arms in the middle as well.

It is the seventh flag in the image with the options.

Bolivia began its fight for independence in 1809, with a new Bolivian Republic being declared on August 6, 1825. This South American country finally adopted the national flag in 1851. The National Flag of Bolivia can be described as a horizontal tricolor flag. The color of the stripes, from top to bottom, are red, yellow and green.

There are numerous reasons why these colors were chosen to feature on the flag. Some say that red stands for bloodshed, and in particular the Bolivian soldiers who fought for the country’s independence and freedom, and in subsequent conflicts. The color green symbolizes the nation’s fertility, and yellow represents the country’s mineral deposits.

Like many nations, Bolivia also has a formal State Flag, which features the coat of arms of Bolivia central to its design.

The coat of Arms of Bolivia has a complex design that is highly representative of the country’s history, struggle for independence, geography and resources. The coat of arms features a central crest and is encircled by a border which incorporates ten stars positioned around the bottom half. The stars represent the nine departments of Bolivia, and also Litoral, which was annexed by Chile in 1879. Within the border, the coat of arms features the silver mountain, Pitosi, with the sun rising behind it. An Alpaca stands next to a tree and a wheat sheaf. An Alpaca can be described as a type of mammal related to the llama. It is a long-haired animal that originates from the continent of South America.

Six Bolivian flags, three on either side, surround the central logo. A pair of crossed cannons also feature on the coat of arms, symbolizing Bolivia’s struggle for independence. In addition to the cannon, four muskets also appear on the coat of arms. An axe and a red Phrygian hood are also depicted and represent liberty. The laurel branches are a symbol of peace, and the Andean condor highlights a willingness to defend the nation.

Let us know in the comments section below if you managed to solve the Worldle today and if there are any other games you want us to cover. Click here for the hints and the answer to Worldle 308!