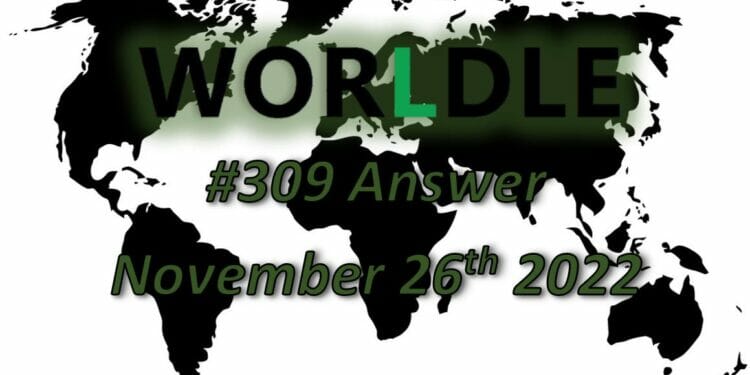 Here is the answer for the 309 Worldle country today, released on November 26th, 2022 and some hints to help you solve it.

UPDATE: Click here for the hints and the answer to Worldle 310!

Here is what the country/territory looks like for the Worldle 309 puzzle today:

The answer to the Worldle 309 country/territory today is…

FUN FACTS: Brazil is the world’s fifth-largest country and has the sixth most people living there of any country in the world. Over 211 million people live in Brazil.

Most of the Amazon rainforest is in Brazil. The rainforest is full of animals and sometimes called ‘the lungs of the Earth’ because all the trees pump out oxygen which help combat climate change.

Unfortunately Brazilian rainforest is being cut and burnt down to graze cattle and grow palm oil. This is making climate change worse.

Brazil, officially the Federative Republic of Brazil, is the largest country in both South America and Latin America. At 8.5 million square kilometers (3,300,000 sq mi) and with over 217 million people, Brazil is the world’s fifth-largest country by area and the seventh most populous.
The federation is composed of the union of the 26 states and the Federal District. It is the largest country to have Portuguese as an official language and the only one in the Americas; one of the most multicultural and ethnically diverse nations, due to over a century of mass immigration from around the world; and the most populous Roman Catholic-majority country.

What Are The Worldle 309 Bonus Answers Today?

There are three bonus rounds today and the first one is to guess the ten countries that border Brazil.

The county outlines are shown to you and here are the answers to the countries next to Brazil below:

The second round is to guess the capital of Brazil.

The capital city of Brazil is…

The third and final bonus round is to guess the flag for Brazil. There are eight options for the flags, which can be seen below:

The Brunei flag is bright green with a yellow diamond in the center filled with a blue globe. Within the blue globe are 27 stars and a white banner with the country’s slogan: Ordem e Progresso, which means Order and Progress.

It is the fourth flag in the image with the options.

During the Brazilian Empire, Brazil had a different flag and the colors had different meanings. The blue and white of the past flag represented the Virgin Mary, highlighting the country’s deep roots in the Catholic religion.

Let us know in the comments section below if you managed to solve the Worldle today and if there are any other games you want us to cover. Click here for the hints and the answer to Worldle 310!