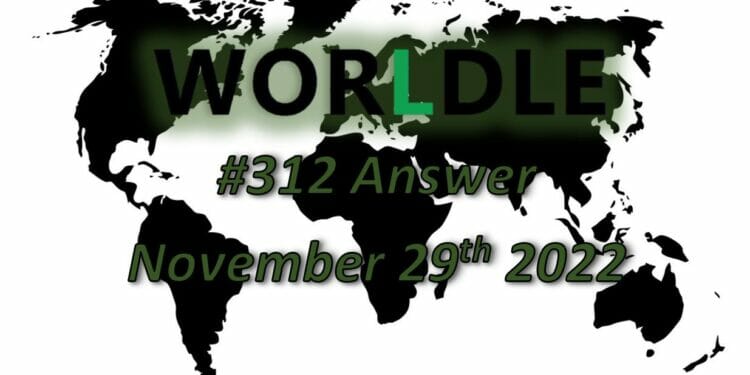 Here is the answer for the 312 Worldle country today, released on November 29th, 2022 and some hints to help you solve it.

Here is what the country/territory looks like for the Worldle 312 puzzle today:

The answer to the Worldle 312 country/territory today is…

FUN FACTS: Argentina is home to both the highest and lowest points of the Southern Hemisphere.

Mount Aconcagua, located in Mendoza, marks the highest point of the Southern Hemisphere, with a peak of 6,962 metres. The mountain is one of the Seven Summits of the seven continents. The first recorded ascent of Aconcagua took place in 1897 and was led by the famous British mountaineer Edward FitzGerald.

In contrast, the lowest point of the Southern Hemisphere is Laguna del Carbon, a salt lake that sits in the Santa Cruz province. Translating to ‘coal lagoon’, this basin sits 105 metres below sea level and is also the seventh-lowest point on the planet.

Argentina is a federal state subdivided into twenty-three provinces, and one autonomous city, which is the federal capital and largest city of the nation, Buenos Aires. The provinces and the capital have their own constitutions, but exist under a federal system. Argentina claims sovereignty over the Falkland Islands, South Georgia and the South Sandwich Islands, and a part of Antarctica.

What Are The Worldle 312 Bonus Answers Today?

There are three bonus rounds today and the first one is to guess the five countries that border Argentina.

The county outlines are shown to you and here are the answers to the countries next to Austria below:

The second round is to guess the capital of Argentina.

The capital city of Argentina is…

The third and final bonus round is to guess the flag for Argentina. There are eight options for the flags, which can be seen below:

The Argentina flag has three stripes, two blue and one white. There is also a golden sun image in the middle of the white stripe.

It is the eighth flag in the image with the options and you can see what it looks like below:

The colours in the Argentina flag are meant to symbolize the blue sky opening up to reveal white cloud. This was said to have occurred during the Liberation demonstration in 1810.

Let us know in the comments section below if you managed to solve the Worldle today and if there are any other games you want us to cover.