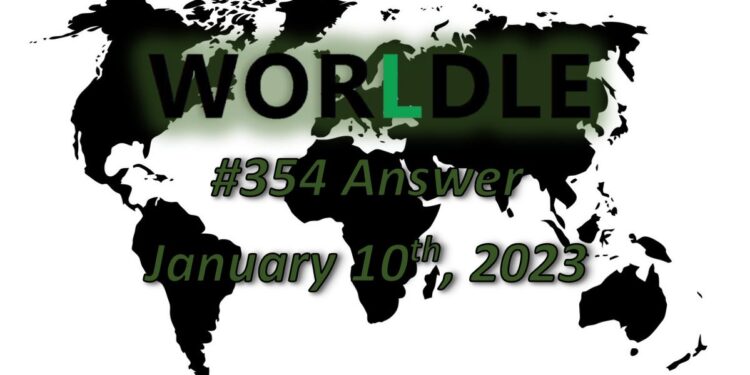 Here is the answer for the 354 Worldle country today, released on January 10th, 2023 and some hints to help you solve it.

UPDATE: Click here for the hints and the answers to Worldle 355!

Here is what the country/territory looks like for the Worldle 354 puzzle today:

The answer to the Worldle 354 country/territory today is…

FUN FACTS:Syria is home to one of the oldest civilisations in the world. Archaeologists have uncovered skeletons and bones of Neanderthals that lived in the region dating back to around 700,000 years ago. The city of Ebla is one of the oldest settlements excavated and it is thought to have existed around 3,000 BC. Also found at the site of Ebla were around 1,800 clay tablets dating from around 3,000 BC, making this the oldest library in the world.

What Are The Worldle 354 Bonus Answers Today?

There are four bonus rounds today and the first one is to guess the five countries that border Syria.

The county outlines are shown to you, but the third one hasn’t for some reason and here are the answers to the countries next to Syria below:

The second round is to guess the capital of Syria.

The capital city of Syria is…

The third round is to guess the flag for Syria. There are eight options for you to choose from and here is what the Syria flag looks like below:

When the current flag of Syria was first adopted in 1958, it was when Syria had finally become completely independent of European influence and had decided to form the United Arab republic with Egypt. At the time, the two stars were added to represent Syria and Egypt (the two founding states of the United Arab Republic) and the colours were given contemporary meanings. The colours now mean the following:

Red: The shed of blood for freedom

Green stars: Syria and Egypt together

Black: The oppression that Arabs have suffered

The Syrians then changed their flag another 3 times between 1961 and 1980, before finally settling on the current design. The reason behind the rush of changes was the ever-changing nature of the Syrian state. Different regimes came to power and different nation-building efforts were put into place. The largest of these was the Federation of Arab States, consisting of Syria, Egypt and Libya, but I’m sure all those changes will require another blog.

When travelling through the government-controlled parts of Syria, you will see the flag of Syria literally everywhere, often adorned with the face of the President Bashar al Assad, or his father Hafez al Assad.

The fourth and final round is to guess the population and currency of Syria and the answers are:

Let us know in the comments section below if you managed to solve the Worldle today and if there are any other games you want us to cover. Click here for the hints and the answers to Worldle 355!