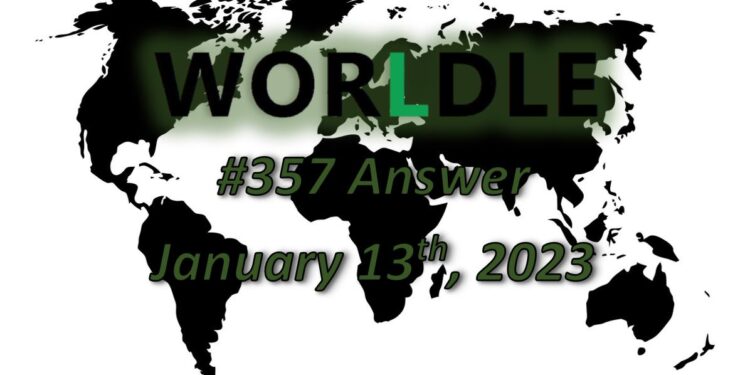 Here is the answer for the 357 Worldle country today, released on January 13th, 2023 and some hints to help you solve it.

UPDATE: Click here for the hints and the answers to Worldle 358!

Here is what the country/territory looks like for the Worldle 357 puzzle today:

The answer to the Worldle 357 country/territory today is…

Known locally as ‘balut’, this cheap street eat certainly won’t be for everyone! Balut is a fertilised duck egg, incubated for 2-3 weeks before being steamed and finally eaten. Although many westerners baulk at the idea of slurping down partially developed duck, it is a very popular delicacy in Southeast Asia and especially in the Philippines.

To eat balut like a local, you should first make a hole in the shell, season the inside with salt and give it a swirl. Suck out the broth through the shell before peeling it off to expose the meat. You can eat everything inside, from the yolk to the chick. Although the white is edible, a lot of people don’t like it because it is very tough.

What Are The Worldle 357 Bonus Answers Today?

There are four bonus rounds today and the first one is to guess the six countries that border Philippines.

The county outlines are shown to you and here are the answers to the countries next to Philippines below:

The second round is to guess the capital of Philippines.

The capital city of Philippines is…

The third round is to guess the flag for Philippines. There are eight options for you to choose from and here is what the Philippines flag looks like below:

The Philippine national flag has a rectangular design that consists of a white equilateral triangle, symbolizing liberty, equality and fraternity; a horizontal blue stripe for peace, truth, and justice; and a horizontal red stripe for patriotism and valor.

In the center of the white triangle is an eight-rayed golden sun symbolizing unity, freedom, people’s democracy, and sovereignty. Each ray represents a province with significant involvement in the 1896 Philippine Revolution against Spain.

Three five-pointed stars, one at each of the triangle’s points, stand for the three major island groups

The fourth and final round is to guess the population and currency of Philippines and the answers are:

Let us know in the comments section below if you managed to solve the Worldle today and if there are any other games you want us to cover. Click here for the hints and the answers to Worldle 358!