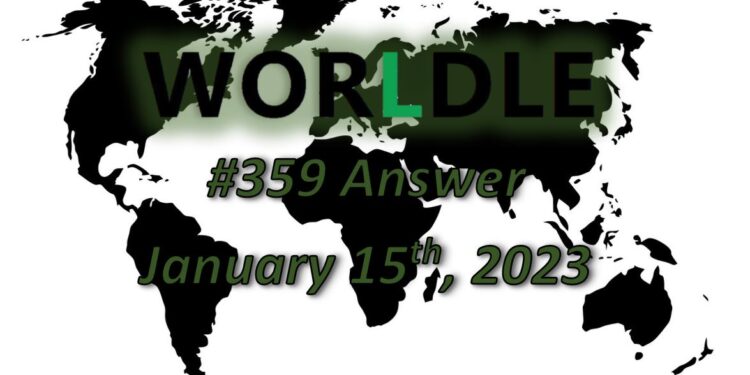 Here is the answer for the 359 Worldle country today, released on January 15th, 2023 and some hints to help you solve it.

UPDATE: Click here for the hints and the answers to Worldle 360!

Here is what the country/territory looks like for the Worldle 359 puzzle today:

The answer to the Worldle 359 country/territory today is…

FUN FACTS: The Himalayas is the largest mountain chain in the world that stretches over 3500 km across Pakistan, India, Nepal, Bhutan, and China. And the major part of that majestic mountain range lies in Nepal.

What Are The Worldle 359 Bonus Answers Today?

There are four bonus rounds today and the first one is to guess the two countries that border Nepal.

The county outlines are shown to you and here are the answers to the countries next to Nepal below:

The second round is to guess the capital of Nepal.

The capital city of Nepal is…

The third round is to guess the flag for Peru. There are eight options for you to choose from and here is what the Nepal flag looks like below:

The national flag of Nepal is the world’s only national flag that is non-quadrilateral in shape. The flag is a simplified combination of two single pennons, the vexillological word for a pennant. Its crimson red is the color of the rhododendron, the country’s national flower. Red is also the sign of victory in war.

he blue border is the color of peace. Until 1962, the flag’s emblems, the sun and the crescent moon, had human faces. They were removed to modernize the flag. The faces remained on the sun and the moon on the Royal Standard until the abolition of the monarchy in 2008.

The blue border symbolizes the peace and harmony that has been prevalent in the country since the age of Gautama Buddha, who was born in Nepal. The crimson red is Nepal’s national color, and it indicates the brave spirits of the Nepalese people. The two triangles symbolize the Himalaya Mountains and represent the two major religions, Hinduism and Buddhism.

The fourth and final round is to guess the population and currency of Nepal and the answers are:

Let us know in the comments section below if you managed to solve the Worldle today and if there are any other games you want us to cover. Click here for the hints and the answers to Worldle 360!