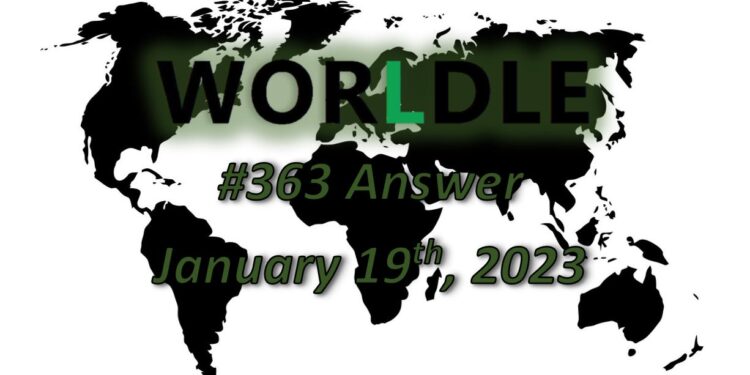 Here is the answer for the 363 Worldle country today, released on January 19th, 2023 and some hints to help you solve it.

UPDATE: Click here for the hints and the answers to Worldle 364!

Here is what the country/territory looks like for the Worldle 363 puzzle today:

The answer to the Worldle 363 country/territory today is…

FUN FACTS: Originally, Moldovans wrote in Latin, but efforts to separate the ethnic groups of Moldovans and Romanians led the Soviet Union to order Moldovans to use the Cyrillic alphabet in 1939. Shortly after the fall of communism in 1989, however, they reverted back to the original Latin script.

What Are The Worldle 363 Bonus Answers Today?

There are four bonus rounds today and the first one is to guess the two countries that border Moldova.

The county outlines are shown to you and here are the answers to the countries next to Moldova below:

The second round is to guess the capital of Moldova.

The capital city of Moldova is…

The third round is to guess the flag for Moldova. There are eight options for you to choose from and here is what the Moldova flag looks like below:

The blue-yellow-red tricolour of Moldova is inspired by the flag of Romania, reflecting the two countries’ national and cultural affinity. On Moldova’s flag, the yellow stripe is charged with the national arms. Like the Romanian coat of arms, the Moldovan arms, adopted in 1990, features a dark golden eagle holding an Orthodox Christian cross in its beak.

Instead of a sword, the eagle is holding an olive branch, symbolising peace. The blue and red shield on the eagle’s chest is charged with the traditional symbols of Moldova: an aurochs’ head, flanked by a rose in dexter and a crescent in sinister and having a star between its horns, all of gold.

These two national flags are also very similar to the flags of Chad and Andorra, which are all based on vertical stripes of blue, yellow, and red.

The fourth and final round is to guess the population and currency of Moldova and the answers are:

Let us know in the comments section below if you managed to solve the Worldle today and if there are any other games you want us to cover. Click here for the hints and the answers to Worldle 364!