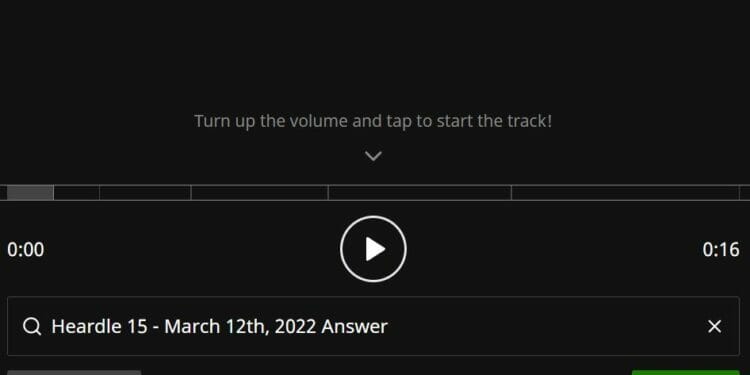 A new song is available to guess for Heardle 15, released on March 12th, 2022. Here’s our hints and the answer to help you continue your winning streak.

The release and popularity of Wordle saw many clone games release trying to achieve a similar base. There’s no information regarding how many daily players there are for Wordle, but we do know some stats for some of the other games.

With so many daily games now available, Twitter users are posting their daily to-do list. On top of most players lists is Wordle, Quordle, Nerdle, and now Heardle. If you’re new to Heardle, players can listen to a short clip of a song, and then either guess a song by typing it into the bar at the bottom of the page, or they can skip a guess.

If you guess incorrectly or you skip a guess, more of the song will be revealed, making it easier on your next attempt. There have been a few easy songs, which players manage to guess in one or two tries. However, some are harder and might require some help. Below, you’ll find some hints and the answer toe Heardle 15 released on March 15th, 2022.

Here’s a couple of hints to help you guess the 15th March daily song:

For a number of players, this song might be too old for you to know. Others will likely guess today’s daily Heardle within a couple of tries. For those of you that want to continue their streak, the answer to Heardle 15 (March 12) is Whitney Houston – I Wanna Dance With Somebody (Who Loves Me).