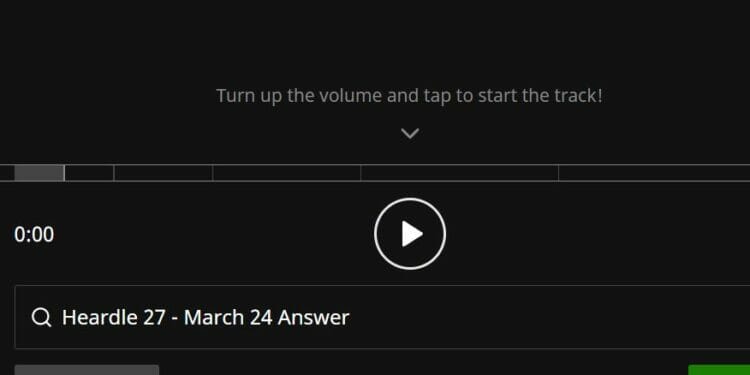 A new day, a new Heardle to complete. Song 27 was released on March 24th, 2022, and here are our hints along with the answer.

It’s almost been four weeks since Heardle was released. Out of all the games that have taken inspiration from Wordle, Heardle and Quordle are probably the most popular.

Quordle is popular because it’s harder than Wordle and there’s a practice mode to play an unlimited amount of puzzles. Heardle has gained a loyal player because they’re quite different from your standard Wordle alternative.

Instead of guessing a word or equation, Heardle tasks players with guessing the daily song. You start off with an audio bite and from there, players can guess what the song is.

Each incorrect or skipped guess will unlock more audio bites with a total of six available. The more audio bites you need to guess the daily song, the lower your score will be. You can then share the score on social media and wait for the next Heardle. A new song is available at midnight local time but some players change the time on their device to play early.

Since we came across the game, we’ve been providing some basic hints along with the answer for those looking to keep their winning stream going. Today is no different and we have hints and the answer for Heardle 27, released on March 24th, 2022.

We’ve seen a lot of players guess several songs on their first attempt. However, this is when the first audio bite is what we’d call a huge hint. Some tunes or words in the first audio bite can give away the song straight away. Others are difficult and require players to listen to a few in order to know what the song is.

There are times when there are some old-school songs or songs that you’ve never heard of. That’s when it becomes difficult to guess which is why we provide hints. Here are our hints for March 24, 2022.