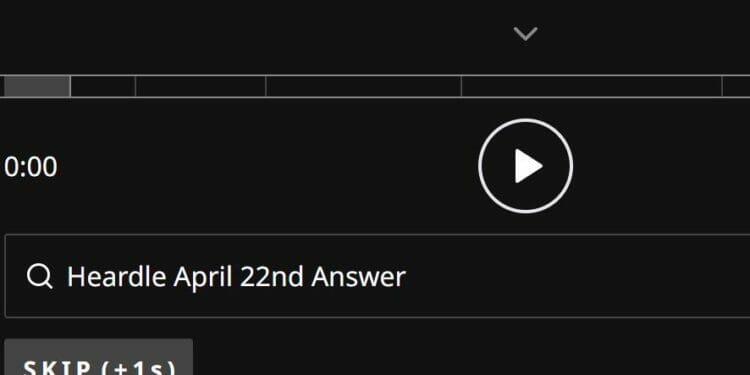 Song number 56 for Heardle has been released on April 22, 2022. Here are our hints and the answer to today’s popular music game.

Since the sale of Wordle to The New York Times, they’ve been pursuing games that use the name in some way. Wordle Archive, for example, was shut down a few weeks ago when the site owner received a DMCA notification.

For those who hadn’t been playing the game for long, it was a popular destination. It allowed gamers to play any prior Wordle, and the site’s removal did not sit well with players who used the site regularly. Wordle 2 was also forced to change its name by The New York Times and is now called Word Hurdle.

Popular games like Quordle, Nerdle, and Heardle, on the other hand, will not suffer the same fate. If you haven’t tried Heardle yet, the goal is to guess the daily song in six or fewer attempts.

Players begin with a short intro of the song, with each inaccurate or skipped guess releasing further sections of the song. The longer you have to listen to the song, the lower your score will be. You can publish your score on social media, just like Wordle, which is how the game became popular after Spotify and other popular Twitter accounts in the music industry shared its result on Twitter.

There’s a new Heardle song available each day at midnight local time. If you’re struggling with April 22, 2022 song, we have our own hints along with the answer below.