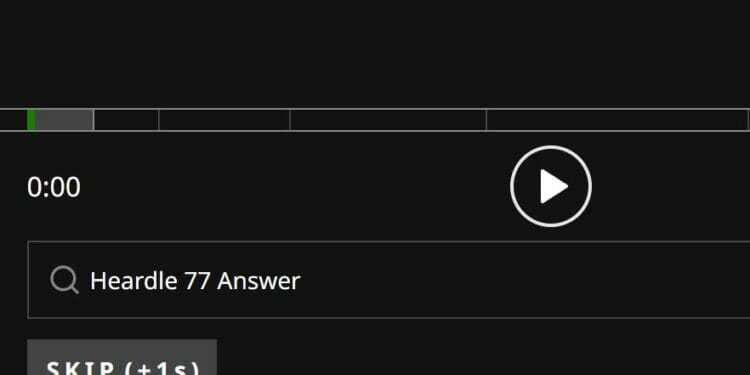 According to statistics sites such as Similar Web, Heardle appears to be one of the top five most popular daily games right now. Wordle obviously tops the list, but Worldle, to my surprise, is also on it.

Heardle was only released six weeks ago, but it quickly grew in popularity due to its unique take on Wordle. If you’ve never played before, the game challenges players to guess the song of the day in six or fewer attempts.

The game begins with an intro to the song. Most of the time, correctly guessing the song of the day takes more than listening to the first part of the intro. To unlock more of the intro, Players must submit or skip a guess.

You can only listen to six sections of the intro before failing the Heardle song of the day. On most days, it’s fairly easy to guess the song without any difficulty.

However, some players might struggle if they’ve never heard the song before. For that reason, we provide hints along with the answer for those of you that don’t want to lose your perfect win streak. Below, you’ll find everything you need to conquer Heardle 77 released on May 13, 2022.

Heardle’s tracks are fully mixed. One day you might hear a song that was released less than six months ago and the next song of the day you might hear a tune from the 1970s. As a result, it’s difficult to keep a winning streak going for long, which is why we’ve come up with our own hints to assist you.

If the four hints above aren’t enough to help you out and you don’t want to ruin your winning streak, the answer for Heardle 77, released on May 13, 2022, is Electric Light Orchestra – Mr. Blue Sky.