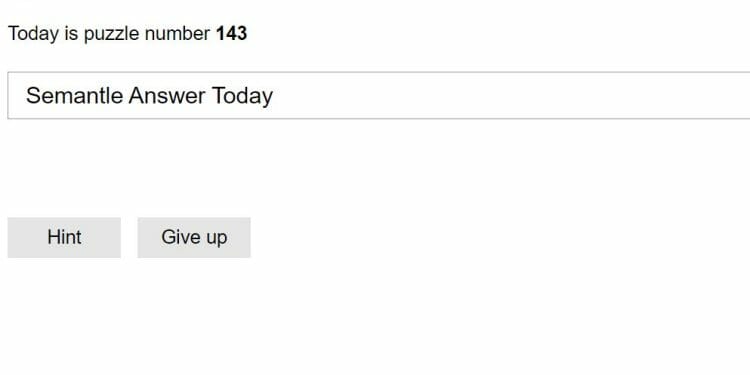 Another day, another Semantle to complete. If today’s puzzle is giving you trouble, here are our hints along with the answer to Semantle 143, released on 21st June 2022.

Over the past six months, many different Wordle-inspired games have been released, many of which are still around today with a large player base.

Most of the games are similar to Wordle, but there are other games that have created a unique spin-off of the popular game, now owned and operated by The New York Times.

Nerdle, Heardle, and Globle are the three main games that come to mind when thinking of the most unique. However, most of the other games that are still around are a good option after you’re done with the daily Wordle.

One of the games that have gained traction over recent weeks is Semantle. In Semantle, each guess must be a valid word. You’ll then get feedback on how semantically similar it thinks your word is to the word answer for the day.

You’ll get a similarity value with the highest possible number being 100. A “getting close” indicator provides players with feedback on how close they are to guessing the word.

Players have an unlimited number of guesses, but that doesn’t take away from how difficult the game can be. A new Semantle is released every day at midnight UTC or 1 AM your time, and today is no different. Here is the answer to today’s Semantle (June 21st, 2022).

If you’re finding it difficult to figure out today’s Semantle, you can use the hint feature on the site. However, if you’re still finding it difficult, or don’t want to keep clicking for more hints. Here are some hints for today’s answer that might help you quicker than the hints provided by Semantle.