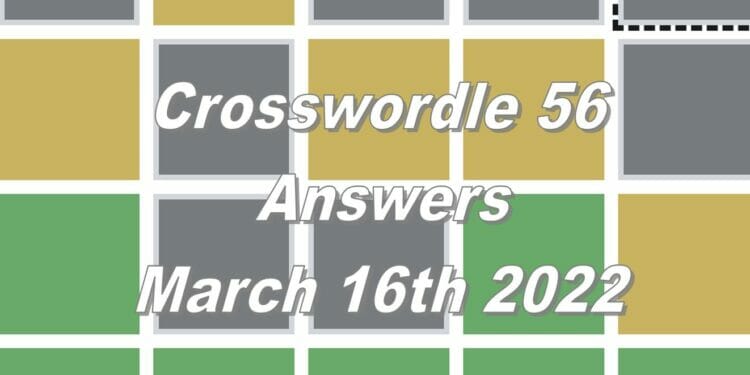 Here is the answer for the Crosswordle 56 words for today, released on March 16th, 2022.

Crosswordle is a puzzle that is based on the same concept as Wordle but instead of guessing the one five-letter answer, you need to guess the words that could have led up to it. There is a grid that is given to you which has green, yellow, and grey squares. You need to use the same principles as Wordle to fill the gird in.

This also means that you cannot use the same letters in the grey squares from the first rows in the rows lower down, which is what makes this puzzle so hard. Don’t worry though as we will have the answers to help you!

For Crosswordle 56 today, the answer at the bottom of the grid is ‘CACAO’. If you look at the row above, you will see there are two yellow squares and one green, which has to be an A. The two letters that will have to go in the yellow squares are O and C as there are only three letters in the word. You also know that the word has to start with ‘OC’ as the C in the first letter of the answer.

Looking at the row above, you also have two yellow squares and again, you know the letters that have to go here and what order they need to be in. The letters that have to go in the second row are O and A. This is because the C cannot be in the second position again as it’s already in that position for row 3 and can’t be the third letter as that is the position of the letter in the answer.

That also leaves the third letter to be an A, which also shows you that the one yellow letter in the first row has to be an O. Now you know all the letters that are in the squares, all you have to do is fill in the grey squares around them!

Here are the words that I used to complete the Crosswordle 56 puzzle released on March 16th, 2022:

Well done if you managed to complete the Crosswordle puzzle today!