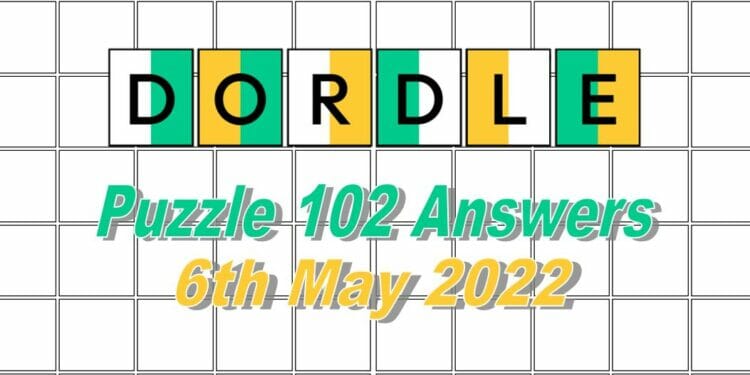 UPDATE: Click here for the hints and the answers to Dordle 103!

Some Dordle puzzles may be more difficult to solve than others, so here are some hints we have to help you solve the Dordle #102 words today.

Hint 1: There is only one common letter in the Dordle words today, which is the letter L.
Hint 2: There are two vowels in the first word (one letter repeated) and only one in the second.
Hint 3: The first word begins with an L and the second one begins with an R.
Hint 4: The first word is any of a class of organic compounds that are fatty acids or their derivatives and are insoluble in water but soluble in organic solvents. They include many natural oils, waxes, and steroids. The second Dordle word is when troops come together again in order to continue fighting after a defeat or dispersion.

I always guess the word ‘BLERT’ next as all the letters in this word have not been guessed yet. This showed me that there is an L in both word and there is also an R in the second word. I now knew three of the five letters of the second word. As there is only one vowel, I thought that it is is either the third letter or could be the second letter, but a double letter straight after the word. Looking at the letters that I know, I did think it was possible that there is a double L in the word. Using this information, I was able to guess the answer to the second word of Dordle 102 in my next guess, which is…

I then decided to guess the word ‘LIVID’ as this would keep the I in the same place and change the positions of the known letters. This was a great guess as it placed the L, D and another I in the correct positions, leaving only the third letter to be guessed.

This made it very easy to solve the answer to the first word of Dordle 102, which is…

Well done if you managed to guess one or both of the words correctly! Click here for the hints and the answers to Dordle 103!