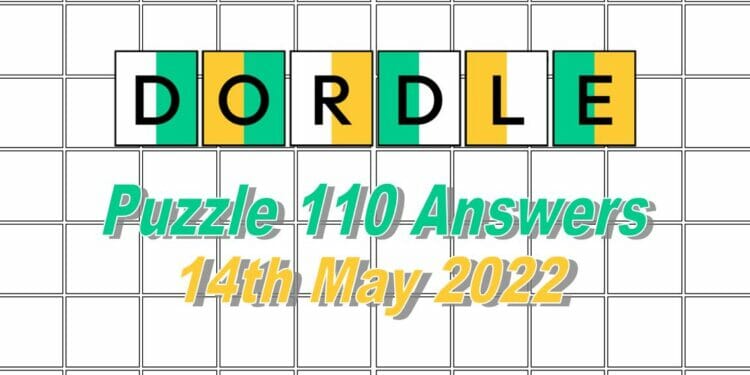 UPDATE: Click here for the hints and the answers to Dordle 111!

Some Dordle puzzles may be more difficult to solve than others, so here are some hints we have to help you solve the Dordle #110 words today.

Hint 1: There is are common letters in the Dordle words today, which are the letters A and S.
Hint 2: There are two vowels in both words today.
Hint 3: Both Dordle word begin with an S.
Hint 4: The first word is a long limbless reptile which has no eyelids, a short tail, and jaws that are capable of considerable extension. The second Dordle word is an aqualung.

Here is how I managed to solve the words for Dordle 110 today. First I guessed the word ‘AUDIO’, which showed me that there is an A in both words and a U in the second. none of which have been placed correctly.

The next word I always guess is ‘BLERT’ and this showed me that there is an E in the first word and a B in the second, but again, none of these letters were put in the correct place either.

I decided to focus on the first word and guesses the word ‘SEAMY’ next to see if I could place the known letters correctly and reveal new letters. This placed the S and A in the correct positions, but not the E.

As the E and A are not next to each other, I figured that the word must end in an E so I guessed the word ‘SHAVE’ as the H and V have not been guessed either. This did place the E correctly, but did not reveal any other letters in the word, which was the same with the next word guessed, which was ‘SPACE’.

I decided to turn my attention to the second word as I now knew all the letters in the word, thanks to the last word I guessed, which meant all I had to do was rearrange the letters to solve the answer for the second word of Dordle 110 in my next guess, which is…

As I only had one guess left, I guessed a word based on the letters I have not used yet and managed to solve the answer to the first word of Dordle 110, which is..

Well done if you managed to guess one or both of the words correctly! Click here for the hints and the answers to Dordle 111!