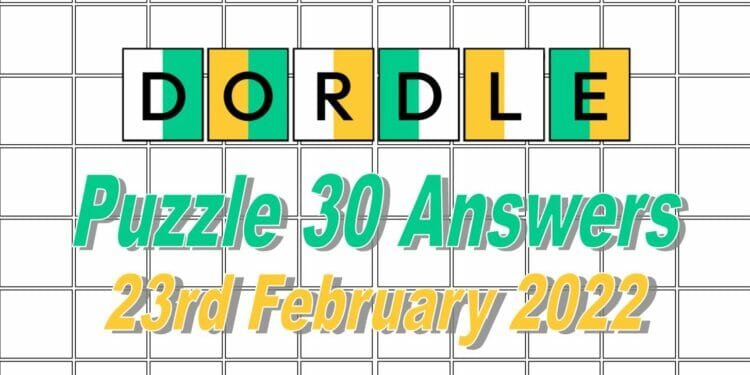 Here is the answer and some hints for the Dordle words for #30 today, released on February 23rd 2022.

UPDATE: CLICK HERE FOR THE HINTS AND ANSWERS TO DORDLE 31!

Dordle is the similar to Wordle, but harder as players need to guess not one but two five-letter words side by side. In Wordle you have six guesses to solve the word, but in Dordle you have seven, but the guesses you make count towards both words, so you have be a bit more selective with the words you choose to guess to reveal the most amount of letters to help you to solve them.

We like to give our readers some hints for the Dordle words before giving you the answer as you may just need a push in the right direction. Here are the hints we have for Dordle 30 puzzle, released today on the 23rd February 2022.

Looking at the second word, I could see that I knew the positions for the E and the R and also knew there was a U in the word, but no idea where it was placed, except for that the word did not start with a U. I rearranged the letters and managed to get the second Dordle 30 answer on my next guess which is…

Well done if you guessed both of those words correctly! Be sure to check back tomorrow for the hints and answers to the new Dordle puzzle!