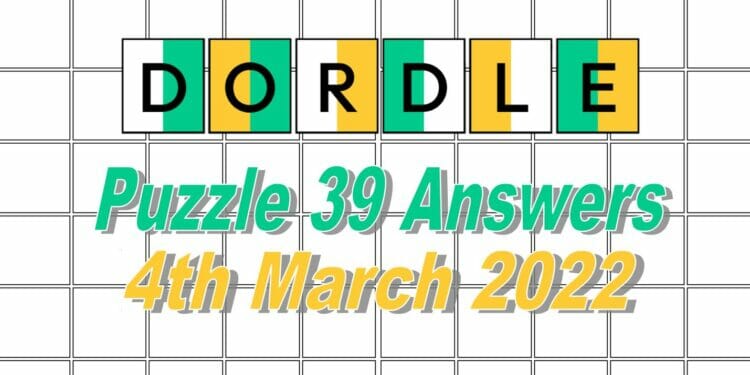 Here is the answer and some hints for the Dordle words for #39 today, released on March 4th 2022.

UPDATE: CLICK HERE FOR THE HINTS AND ANSWERS TO DORDLE 40!

Dordle is like Wordle, only instead of guessing one five-letter word, you need to guess two at the same time. The guesses you make count towards both words, which means you have to try and use words that have different letters in them in order to eliminate or reveal more letter that are in the words. There are only seven guesses you have to guess both the words, which makes this game a lot harder than the original. Don’t worry though as we have hints and answers for all the puzzles so if you need any help, make sure you come back daily.

Here are the hints we have to help you complete Dordle #39 today.

Here is how I manages to solve the Dordle 39 words today. I used the word ‘AUDIO’ as my starter word today and this showed me that there is an A in the first word and the U was placed n the correct position for the second word. I thought I would focus on the second word, but use a word that also has an E in it to see if it comes in either word so I guessed ‘BULGE’. This showed me that there was no E in either word, which means either the vowel is repeated again in both words or it ends in an S or Y.

I decided to go with the word ‘RUSTS’ as my next guess and this showed me there was an S in the first word and an R in the second word. I then wanted to use a word that has a Y at the end and as I knew it had an R in it, it was very likely that there is a double R in the word so I guessed the word ‘HURRY’. This placed the U, R, R and Y in the correct place for the second word which means I only had to get the first letter. The next guess I made was the answer to the second word of Dordle 39, which is…

Looking at the first word, the Y was already placed in the correct spot and I also knew there was a S, H and A in the word. There was only one word I could think of that had those letters in was the answer to word one of Dordle 39, which is…

Well done if you guessed both of those word right!