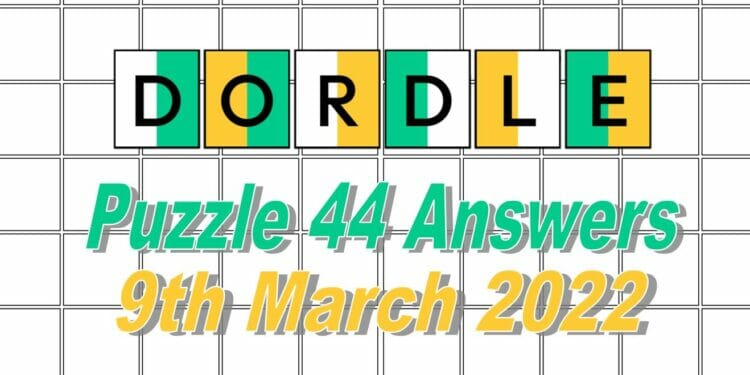 Here is the answer and some hints for the Dordle words for #44 today, released on March 9th 2022.

UPDATE: CLICK HERE FOR THE HINTS AND ANSWER TO THE DORDLE 45 WORDS!

Dordle is the hard version of Wordle as instead of guessing one five-letter word, you need to guess two at the same time and you only have one more guess than the original. The rules are the same where there are no clues as to what the word could be but once you have made a guess, you will know if you have chosen letters that appear in the word and if you have them in the right position.

The best way to play this game is to reveal as many letters that are in both words as quickly as possible in the least amount of guesses, preferably the vowels first as knowing all the vowels in the word eliminates a lot of possibilities. If you are new to the game, don’t worry if you don’t manage to get both words as it can be difficult to get into. We will be giving hints and the answers to all of the puzzles, so make sure you check in if you need a little nudge in the right direction.

Here are the hints we have to help you complete Dordle #44 today.

Here is how I managed to guess the words for Dordle today. I started off by guessing the word ‘AUDIO’ which showed me there was an A and O in the first word and an A and I in the second word, none of which were placed in the correct position. I then decided to focus on the second word and guessed the word ‘TAILS’. This was actually a good guess as it placed the T, A and I in the correct places, which means I only had to guess the last two letters. I then managed to guess to second word for Dordle 44 on my next guess, which is…

For the first word, I know there is an O and A in the word, so I decided to guess the word ‘POACH’. Unfortunately, this did not place the O or A in the correct place, but I did know there was also a C in the word. Chances are the the O and A will be positioned next to each other but as they aren’t in second and third place, they will have to be in third and fourth place. I decided to think of words that started with a C and had OA after a letter and then a letter at the end to complete the word, and the first word I guessed was the answer to the first word of Dordle 44, which is…

Well done if you guessed both words correctly!