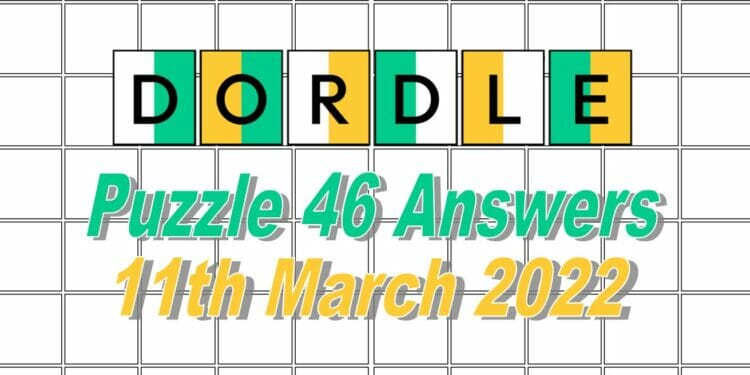 Here is the answer and some hints for the Dordle words for #46 today, released on March 11th 2022.

UPDATE: CLICK HERE FOR THE HINTS AND ANSWERS TO DORDLE 47!

There are many different games that have been inspired by Wordle and Dordle is one of those games! In Dordle, players need to guess two five-letter words at the same time and there are only seven guesses (one more than Wordle) in which to do so! This can make it very hard for beginners, especially if you have guessed the end of a common ending word which could have possible starting letters with such few guesses.

The developer of the game is continuously making improvements to the game and one of the changes that was suggested was to make the board stay as it is so that players cannot continuously refresh the browser and play again, even after they have lost. Most players however did not want the board to be cleared so that they can compare with friends and family which words they used to get to the answer.

Here are the hints we have to help you complete Dordle #46 today.

Here is how I got the Dordle 46 answers today. I first guessed the word ‘AUDIO’ which showed me there was an A in both words, but there was also an O in the first word. I then wanted to check if there was an E in the any of the words, so I went with ‘STEAM’ as my next guess.

This was very helpful for the second word as it showed me there was also an S, T and E in the word. I decided that it would be best to focus on this word so I guessed the word ‘WASTE’ next. This was a great guess that placed the A, S, T and E in the correct places, but as that it a common ending for many words, I decided it was best to try and guess the first word first.

For the first word, I knew there was an A, O and M in the word and I know the A was not placed in the first, second or fourth position so it was possible it could be the third letter and the guess I made next was the answer to the first word of Dordle 46, which is..

Well done if you managed to guess both Dordle words correctly for today!