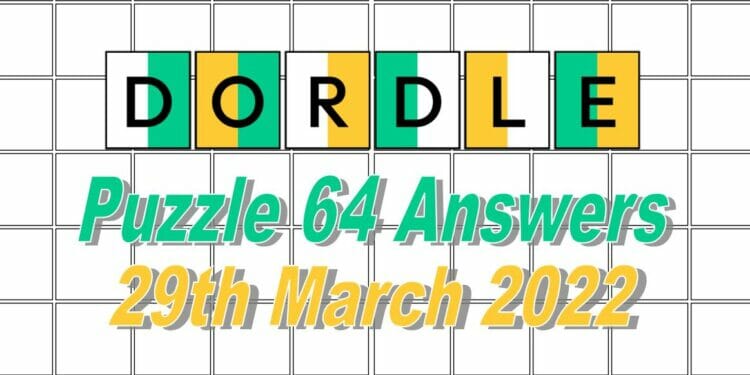 UPDATE: Click here for the hints and the answers to Dordle 65!

There may be some Dordle puzzles that are a little harder to solve so here are some hints we have to help you solve the Dordle #64 words today.

Here is how I managed to guess both the words for Dordle 64 today. As usual, I started with the word ‘AUDIO’ which showed me there is a U in the first word and an A and D in the second. I then decided to go for the word ‘TREAD’ as I wanted to see if either word has an E in it and if I could place the A and D in the correct positions for the second word.

Unfortunately, there was not much information that was revealed by guessing this word apart from knowing more letters that aren’t in the words and that there is an R in the first word. I then guessed the word ‘SHADY’ to see if I could place any letters for the second word.

This word was a good guess as it showed me the first word begins with an S and it also placed the D and Y in the correct places for the second word. It showed me the A was not in the third position, which means it has to be the second letter as I already know its not the first and the last two places have been taken.

I then focused on the second word as I already had two letters in the correct place and I guessed the word ‘BALDY’ and this did place the A in the correct position, but unfortunately the other letters were not in the word. Looking at the first word, there are four letters that have been revealed, which made it easier to guess the first word of Dordle 64, which is…

Looking at the letters that are left, it was a bit easier to guess the second word of Dordle 64, which is…

Well done if you managed to guess these words correctly! Click here for the hints and the answers to Dordle 65!