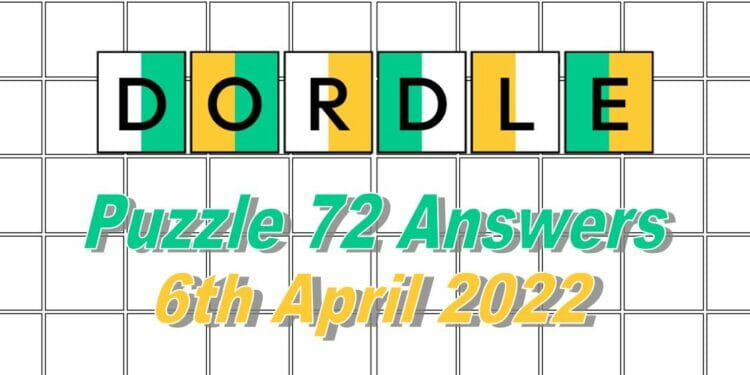 Here is the answer and some hints for the Dordle words for #72 today, released on April 6th, 2022.

UPDATE: Click here for the hints and the answer to Dordle 73!

Dordle is a slightly more difficult version of Wordle in which players must guess not one, but two five-letter words for the puzzle. There are no initial hints as to what the words could be, but once you’ve made a guess, the tiles will change colour, indicating whether you guessed a letter that appears in the word and if you have placed the letter correctly.

Wordle gives you six guesses to guess one word, whereas Dordle gives you seven guesses to solve both words of the day. This makes it more difficult because you only get one more guess for guessing two words instead of one. You can play the game however you want, but we recommend attempting to guess the vowels for the words in as few guesses as possible to give you a good solid foundation.

Some Dordle puzzles may be more difficult to solve than others, so here are some hints to help you solve the Dordle #72 words today.

Here is how I managed to solve both of the Dordle 72 words today. The first word I started with is ‘AUDIO’, which showed me there is an O in the first word, but in the wrong position, and a U in the second word, which has been placed correctly.

I then guessed the word ‘PURES’ which was a great guess as it showed me there is an R in both words, with it being correctly placed in the second word. It also placed the E in the correct place for the first word.

Looking at the second word, I thought it could have a double letter, so I guessed the word ‘HURRY’. This was a great guess as it showed me that there was another R and it placed that and the Y in the correct position, which meant there is only one letter to guess for the second word. This word also showed me there are two R’s in the first word, which is something I would not have guessed.

As there are a few possibilities the second word could be, I decided to focus on the first word instead. I know it can’t have a double R, which made me think the word could start and end with an R, so I guessed the word ‘ROVER’. Again, this was a great guess as it placed all letters in the correct place, apart from the middle one.

Again, there are a few possibilities as to what this word could be so I decided to guess a word that would use as many of the other letters I hadn’t guessed yet as I could that could potentially be used in the words. I went with the word ‘FIGHT’ and by total luck, this completed both Dordle 72 words for me!

The answer to the first word of Dordle 72 is… ROGER!

The answer to the second word of Dordle 72 is… FURRY!

Well done if you managed to solve one or both of the Dordle words today! Click here for the hints and the answer to Dordle 73!