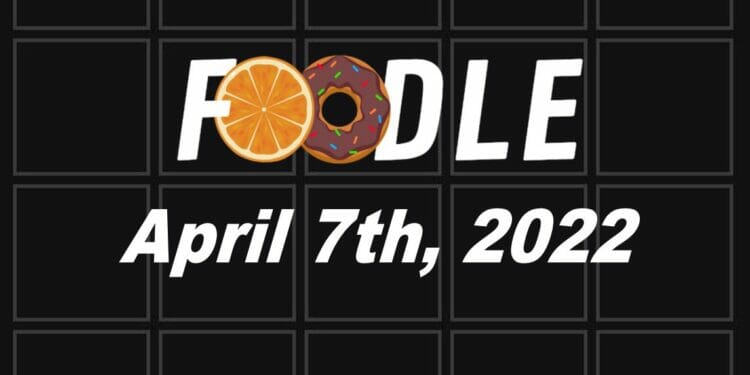 UPDATE: Click here for the hints and the answer to Foodle 98!

Foodle is another Wordle-inspired game we recently discovered that requires you to guess the day’s food-related word. The game works similarly to Wordle in that you have six guesses to solve the day’s word, which is a five-letter word.

Once you’ve made a guess, the tiles will turn green, yellow, or grey. This tells you which letters appear in the word based on your guess and which have been correctly placed, assisting you in solving the word.

There are some changes that could be made to the game, which would be extremely beneficial. At the moment, when you exit and return to the browser, the board resets, which means you can guess again if you didn’t get it right the first time. This will also mean that you can’t compare your answers to those of your friends and family. It would be ideal if your guesses stayed on the board so you could see how you came up with the answer.

There are also no game stats in the game to see how long a player’s winning streak is, how many times they’ve played, and so on. It would be fantastic if these changes were made to the game to make it more appealing. Nevertheless, this game is still fun to play and can be quite challenging at times, which is why we have some hints for the word to help you, which you can see below.

Here are some clues we have for Foodle 97 to help you to get the answer today.

Hint 1: Contains the letter S.
Hint 2: It starts with the letter C.
Hint 3: There is one vowel in the word today.
Hint 4: It is a soft, white substance formed when milk coagulates, used as the basis for cheese.

Here is how I managed to guess the Foodle 97 word in four guesses today. First I guessed the word ‘GRAPE’, which showed me there is an R in the word, but it has not been placed in the correct position. I then went with the word ‘ROLLS’ to see if I could place the R and use a vowel that I have not used yet to see if it is in the word.

Unfortunately, there is no O in the word either and the R had still not been placed correctly. The word did reveal there is an S in the word, and had also placed it correctly at the end!. I wanted to know the vowels that are in the word, so I guessed the word ‘GUIDE’ as it uses both remaining vowels.

This was a great guess as placed the U and D in the correct position. Now there are only two letters I need to fill in, but I already know by the process of elimination that the R has to be the third letter as it cannot be the first. This made it extremely easy to guess the answer to Foodle 97, which is…

Well done if you managed to guess the answer correctly! Click here for the hints and the answer to Foodle 98!