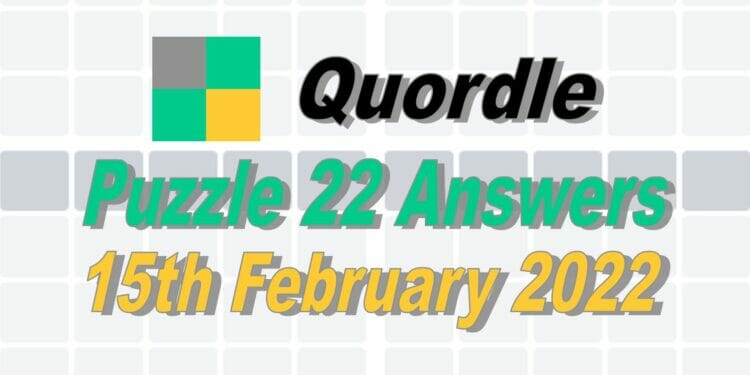 Here’s some hints and the answers to today’s Quordle daily words, 22, released on February 15, 2022.

There have been numerous different word games since Worlde gained popularity. Lewdle was one of the first ones, a similar game but with five letter swear words. Then there’s Dordle, slightly different to the two already other popular word games.

Instead of guessing one five letter word in six tries, players need to guess two five letter words in a maximum of seven tries. Nerdle takes the concept of Wordle with a mathematics twist with players having to solve the equation of the day with a normal and mini mode.

With most of these new games limited to one daily word or equation, most players find themselves jumping from one game to the other. Quordle has gained popularity fairly quickly after major publications gave the game exposure. According to the site, the have more than 160,000 total players, and that’s likely to increase rapidly.

We have the Quordle 22 answer, which is the new daily set of words for February 15th, 2022. We also have some hints if you want to try figure it out for yourself. A quick and obvious warning, there are spoilers to today’s Quordle, but you’ll only find the answer below the hints we’ve provided. We suggest scrolling down slowly if you only want to see the Quordle hints for #22.

As this is more difficult in comparison to the other word games, it’s not surprising players are looking for hints. Below, we have some hints for the Quordle 22 answer, which should help you figure out the answer without looking further down at our answers below.

If you can’t figure out the answer to all the daily words in Quordle 22 released on February 15th, 2022, we have the answers below:

If you managed to guess them correctly, well played. It’s definitely much harder than Wordle to figure out, which is likely why players are flocking to the game. We’ll be back tomorrow with more hints and answers.