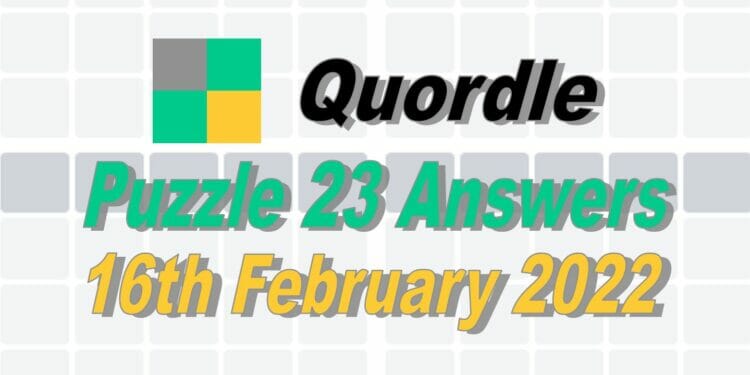 We have some hints and the answers to all four of the new words for today’s Quordle 23 released on February 16th, 2022.

A new day, a new set of words for all of our favourite daily word games. With Wordle gaining so much popularity over the past few months, there’s been a lot of similar games that have been created, all of which provide credit to Wordle, the first viral word game.

Wordle only has one new word a day, which leaves most players wanted to test their abilities with the other word games that have been created. For those that want to test their math skills, you can try out Nerdle.

If you want an extreme version of a word game, then Quordle is the game for you. Quordle was created at the end of January and was played with close friends until major publications gave the game some coverage including The Guardian.

Quordle now has over 150,000 players, a number which is growing rapidly day by day. If you’re new to the game, you need to guess four words instead of one and you get nine tries instead of six. Apart from that, the rules are the same as the other word games.

A new Quordle has been released on February 16th, 2022, Quordle 23. Here’s some hints along with the answers for all four words. If you don’t want the answer, be sure to scroll down slowly to the hints. The answer is then under it’s own sub-heading, so it’s unlikely you’ll see the answer if you want to.

If you think other games were a challenge, this will definitely make you sweat when trying to figure out the answer to all four words. However, we have some hints for Quordle 23 below:

If you still can’t find the solution from the above hints, here’s the Quordle 23 answer for all four words: