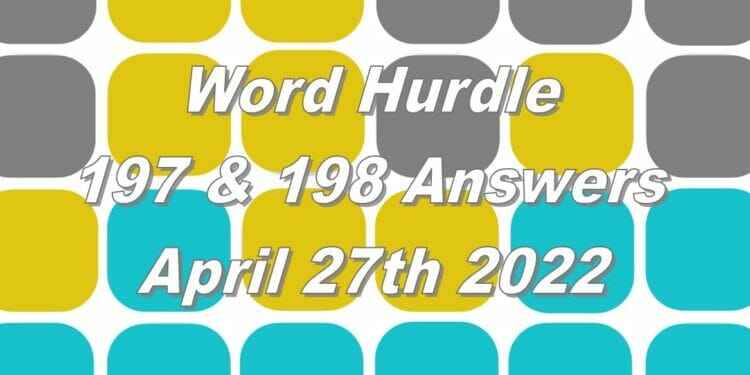 UPDATE: Click here for the hints and the answers to Word Hurdle 199 and 200!

Here are some hints we have for Word Hurdle 197 to help you to complete the word for today.

Hint 1: Contains the letter G.
Hint 2: It starts with the letter R.
Hint 3: There are two vowels in the word today.
Hint 4: Consider or think of in a specified way.

Here is how I managed to solve the answer to Word Hurdle 197 today, but it did take all six guesses to get the word. I guessed the word ‘AUDIOS’ first (as per usual), which was a good guess as it showed me that there is an A and D in the word, but they have not been correctly placed.

I then wanted to see if I could place the A, E and D by guessing the word ‘PLACED’. This guess did place the D correctly so it wasn’t a wasted guess, but no other letters were discovered.

The next word I guessed was ‘BARRED’ to see if I could place the A or R in the word. This word did not place any letters correctly, but it did show me that there are two R’s in the word.

I then guessed the word ‘REWARD’ which placed all the letters I had just mentioned in the correct positions, which left the one letter to be guessed. This made it very easy to solve the answer to Word Hurdle 197 in my next guess, which is…

Here are some hints we have for Word Hurdle 198, released in the afternoon of April 27th, to help you to complete the word for today.

Hint 1: Contains the letter P.
Hint 2: It starts with the letter I.
Hint 3: There are two vowels in the word today.
Hint 4: To bring goods or services into a country from abroad for sale.

Here is how I managed to solve the answer to Word Hurdle 198 in four guesses today. I guessed the word ‘AUDIOS’ first, as usual, which showed me that there is an I and O in the word, which hadn’t been placed correctly.

I then guessed the word ‘OPTICS’ as it placed the vowels in a different position and also uses (mostly) new letters I have not guessed. This was a great guess as it revealed that there is a P and T in the word as well. Unfortunately, none of the letters were placed correctly.

The next word I guessed was ‘PINKER’ as I wanted to make sure there were no E’s in the answer and I also wanted to see if I could uncover more letters in the word. I did find out that there is an R in the answer as well.

I now knew five out of the six letters, which made it very easy to guess the answer to Word Hurdle 198, which is…

Well done if you managed to guess one or both of the Word Hurdle words correctly today! Click here for the hints and the answers to Word Hurdle 199 and 200!