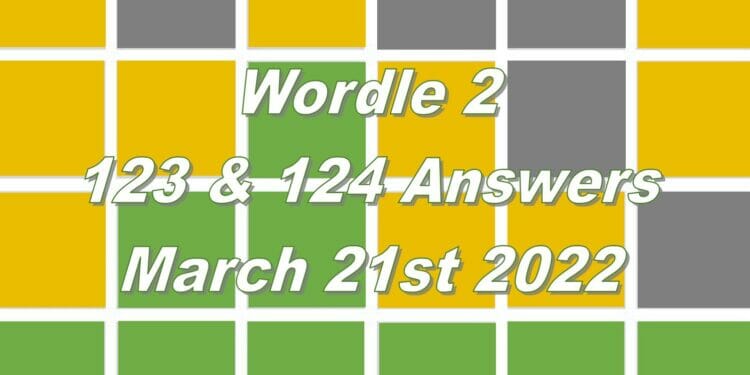 As previously mentioned, there are two words released daily, and we have the hints and answers for both words released on March 21st, 2022 below. If you want to avoid any spoilers for the afternoon word, it’s best to scroll slowly.

Here are some hints we have for Wordle 2 #123 to help you to complete the word for today.

Hint 1: Contains the letter B.
Hint 2: It starts with the letter D.
Hint 3: There are three vowels in the word today.
Hint 4: This word means two of something.

Here is how I managed to solve the Wordle 2 #123 word today in only three guesses! I started with the word ‘AUDIOS’ and this showed me there is a U, D, and O in the word for today, which was a great start. I then decided to guess the word ‘DOUBLE’ as it places all the known letters in a different place. This again was a really good guess as it placed the first four letters, ‘DOUB’ correctly.

As I had managed to guess the start of the word in the previous guess, it was very easy to then solve the answer to Wordle 2 #123 on my next guess, which is…

Here are some hints we have for Wordle 2 #124, released in the afternoon of March 21st, to help you to complete the word for today.

Hint 1: Contains the letter Y.
Hint 2: It starts with the letter L.
Hint 3: There are two vowels in the word today.
Hint 4: If you get in trouble, you will hire this person to help you.

It took me five guesses to get the answer to Wordle 2 #124 today and here is how I solved it. Of course, I had to start the puzzle by guessing the word ‘AUDIOS’. This showed me there is an A in the word somewhere, just not the first letter and unfortunately, no other letters in the word are in the answer to the afternoon Wordle 2 word.

I then decided to guess the word ‘PLACER’ as it has an E in it and all the other letters were ones I had not previously guessed. This was a really good guess as it placed both the E and R in the word and let me know there was an L in it too. I still had not placed the A in the correct position so I decided to choose a word that would start with an ‘LA’ and end with ‘ER’.

The words I guessed next were ‘LATTER’ and ‘LAGGER’ and the first word did place the L and A in the correct places at the start, which made me think there was a double letter, but for my fifth guess, I took a different approach and managed to solve the answer to Wordle 2 #124, which is…