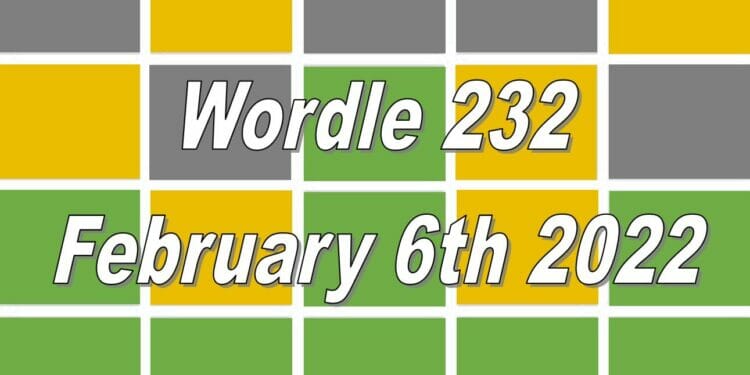 UPDATE: TO WORDLE 233 IS OUT NOW. CLICK HERE FPOR THE ANSWER AND HINTS!

Wordle is such a popular game to play with millions of players going on the website daily to join in the fun. A new Wordle is released every day at midnight in your time zone and players love to share their results on Social Media when they have solved the Wordle of the day. One of the ways it has grown in popularity is by other seeing the cubes on their socials and searching to find the game.

The rules are very simple, solve the daily Wordle by guessing five letter words with no initial hints. When you have made a guess (which needs to be a word in the American English language) the tiles will turn one of three colours, green, yellow or grey. This then helps you to make another guess as you will know if you have guessed a correct letter or which letters are excluded from the Wordle of the day.

There are some readers that need a little bit more help but not be told the actual word and we’ve got you covered! Here are the hints we have for Wordle 232 released on 6th February 2022.

Hint 1: Contains the letter L
Hint 2: It starts with the letter S
Hint 3: There is only one vowel

I like to start with different starting words in Wordle and the first word I started with today was ‘SCALE’. This was a great guess as I got both the S and the L in the right position but I also knew there was no A or E in Wordle 232. This being said, I needed to figure out the vowels that would be in the word so I decided to guess the word ‘STILL’. Success again as I go the I, and the last L, leaving just the second letter to be solved. The third guess I made was the answer for Wordle 232 which was…