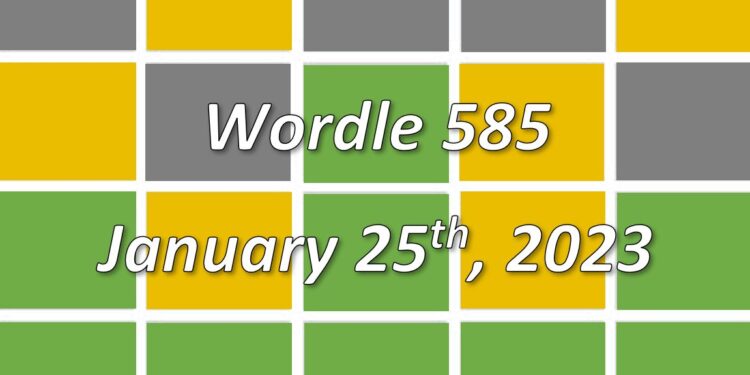 Here is the Wordle answer today for the 585 word, released on January 25, 2023 and some hints to help you solve it.

UPDATE: Click here for the hints and the answer to Wordle 586!

As the word can be quite difficult, we have some hints for Wordle 585 to help you to solve it, which are:

Hint 1: Contains the letter Z.
Hint 2: It starts with the letter M.
Hint 3: There are three vowels in the word today.
Hint 4: It is a noun.
Hint 5: A Central American cereal plant that yields large grains (corn or sweetcorn) set in rows on a cob. The many varieties include some used for stockfeed and corn oil.

Here is how I managed to solve Wordle 585 in six guesses today. I guessed the word ‘AUDIO’ first, which is my usual starter word.

This was a good word to guess as it showed me that there is an A and I in the answer.

As I know two vowels in the word, I thought they would be placed next to each so I guessed the word ‘HAIRY’ next.

This word placed the vowels in the correct position, but did not reveal any other letters in the word.

I then thought that I would guess a word that ends in an E to see if it is in the answer so I guessed the word ‘WAIVE’ next.

This word placed the E correctly, leaving on the first and fourth letters to be guessed.

I guessed the words ‘SAINE’ and ‘BAILE’ next, neither of which revealed any other letters in the answer.

I was now on my last guess and luckily managed to solve the answer to Wordle 585, which is…

Let us know in the comments section below how many guesses it took for you to solve the Wordle answer today and if there are any other games you want us to start covering! Click here for the hints and the answer to Wordle 586!