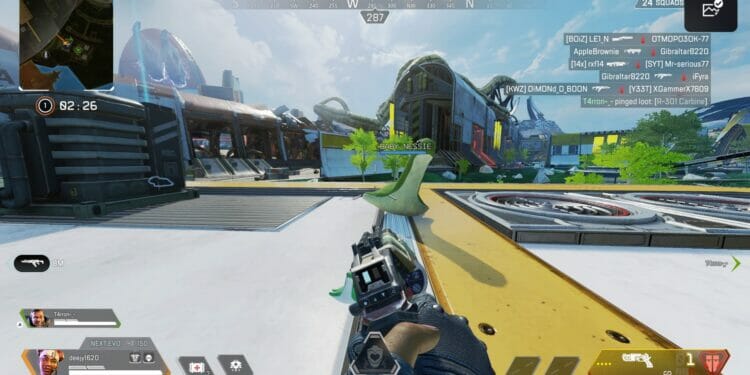 Here is what has been added to Apex Legends in April Fools 2022.

Respawn have made a little change to Apex Legends in the past for April Fools, where you could find gold Mozambique’s that would deal so much damage to opponents. It looks like there is a new variation that has been made to the Mozambique for April Fools 2022, which includes the adorable Nessie plushies that have been little Easter Eggs around the maps in Apex Legends.

If you’ve logged into Apex Legends on April 1st, 2022 you will receive an April Fool badge with the description. “Don’t believe everything you see today!”

When you go into a match, you will notice that there are eggs around the map, which has a light coming off from it, to show you where they are located, similar to when a Care Package has landed. Here is what they look like in-game:

All you need to do is punch or hit them once in order to break the eggs, where you will notice one weapon with some shotgun ammo. It looks like a Mozambique, but when you hover over the weapon, you will actually see that it is called the Ol’ Nessie. Once you have it equipped, you will notice there are only two bullets in the mag.

Once you fire the gun, a Nessie will pop out. That’s right.. a Nessie. These are called ‘Baby Nessie’ (which are just so adorable!) and they aren’t completely pointless as they do deal damage to opponents that are nearby for you. Unfortunately, they do not stay for too long after they have been deployed but they deal damage similar to Spiders found on Storm Point.

This means they will not be able to deal a lot of damage, but it will be enough to distract opponents and keep them at bay if you need to heal up or help you to sneak around if you want to attack!

How Long is the Ol’ Nessie April Fools 2022 Staying in Apex Legends?

The Ol’ Nessie Mozambique won’t be around forever, so don’t worry if you hate it! It looks like the weapon will be in for the weekend, so take advantage of it while you can!

A point to note, not all Mozambique’s are the Ol’ Nessie weapon and there are still Mozambique’s in the weapon rotation. The only way you can get the Apex Legends April Fools gun is either from the eggs or from players boxes once they die if they were holding the gun.

Where are the Prowlers in Apex Legends?

There are no Prowlers spawning in the game for the weekend on Storm Point as they have been replaced with giant Nessie’s! They don’t deal that much damage and have low health, making them easy to kill. This is great as you don’t need to worry about the Prowlers revealing your position to enemies and fighting them off an inconvenient times!

All will return as normal on Monday 4th April 2022 so enjoy it while you still can!