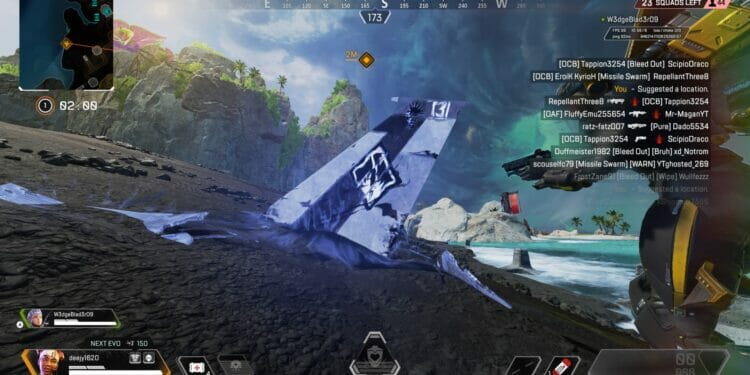 Here is the first teaser for Apex Legends Season 12 that has been seen in-game.

The new season of Apex Legends is only a few weeks away, which means we will be seeing a few teasers for the next season being released. There are already a couple of videos that have been posted by the official Apex Legends account on Twitter of Lisa Stone, the character who interviewed James “The Forge” McCormick and we will be seeing one more of these videos as only two episodes have been released so far. These videos have been introduced to us as the following, “Lisa Stone doesn’t clock out when she’s off the air. From your screens to your ears, her new podcast sponsored by Silva Pharmaceuticals, will get to the bottom of some of the disasters we’ve seen throughout The Outlands.” These videos and the text for them are at the bottom of the article!

There is a teaser that has been released in-game for the upcoming season, which can be seen in Storm Point. During the first few minutes of getting into a Storm Point match, you will see two spaceships fighting in the sky. You then see something flying down from the sky, which lands southwest of Northpad, northwest of Checkpoint. We have marked the exact location on the map below:

When you go to this spot, you will see that part of the tail of the ship has been destroyed and landed here. There is a symbol on the debris, which you can see below. If you look closely, it is the same logo for Mad Maggie, a character we saw in the Story of the Outlands – “Good as Gold” when Fuse was being introduced.

There isn’t much that has been leaked, but what has been said about the legend is that she will have throwing knives and possibly an ammo drop. It is possible the ammo drop could be a new survival item, but nothing has been confirmed. We will let you know when more information is released!

The first episode, Legend of Lies, says the following:

“Over the past few years, there have been a group of isolated tragedies and accidents. But, what if I told you they weren’t isolated? I’m Lisa Stone and I’m going to unravel the well laid wed of lies the Syndicate have wrapped us in, because these events are connected. They are connected to negligent leadership that prioritizes profits over the safety of our citizens. This is clearly displayed in their own Apex Games, where they’ve allowed constant chaos to put our beloved Legends in danger. Well. outside of their usual danger. And it doesn’t stop there, but unfortunately this episode does. Tune in next time as I unravel the truth behind the Syndicate.

Lisa Stone doesn't clock out when she's off the air. From your screens to your ears, her new podcast sponsored by Silva Pharmaceuticals, will get to the bottom of some of the disasters we've seen throughout The Outlands. pic.twitter.com/LFU5gALdMK

“Due to their gross negligence, the late Jimmy “Forge” McCormick, the highly anticipated Legend, is dead and never going to have the chance to enter the Games. I was horrified. Not just because I witnessed a murder, but if the Syndicate can’t protect it’s own Legends, what hope do we have? I’m Lisa Stone and I’m Unravelling the Syndicate. It makes you wonder, with so many people at the helm of the Syndicate, why are we seeing issues pile up while they debate the solution? Lile, the event with the terrorists at the museum.. and the infection brought into Olympus. So what do we do? Who can we depend on? I’ll tell you who.. on the final episode of Unravelling the Syndicate. Tune in next time to hear a statement form the man who is going to save the galaxy.”

Lisa has had first hand experience of the Syndicate's negligence. What will it take for them to care about the Outlands? Listen as she dives deeper in the next episode of her new podcast, Unravelling the Syndicate. pic.twitter.com/mMqgNKy6w4

As previously mentioned, these are the only two videos released so far, but we will be adding the last one here when it is released. It is very possible the man they are talking about is Octanes father as the podcast is sponsored by Silva Pharmaceuticals!

UPDATE: The third and final video has been released, called Dawn of a New Hope, and here is what the video says:

“Welcome to the final episode of Unravelling the Syndicate. I’m Lisa Stone, and I’m here to reveal who is going to save us from the current state of the Syndicate. Duardo Silva, CEO of Silva Pharmaceuticals. A man of action and integrity, he is ready to take a stand against the Syndicate’s incompetence. I have here, a statement from Silva himself. Quote: “The council has failed. You deserve better. You deserve a true leader. A singular leader. I would be honored if you would place your trust in me to guide the Syndicate Space into the future. We need a true leader to run the Syndicate, and we need it now.” End quote. Wow. I’m convinced. Silva sounds like a man on a mission. So we here at OTV will be watching with great interest. I’m Lisa Stone and thank you for listening to Unravelling the Syndicate.”

In the explosive finale of Unravelling the Syndicate, Lisa finally reveals a new hope. Someone bold enough to correct the fatal course that The Syndicate has set us on. Listen now to find out who and hear a statement from the person themselves. pic.twitter.com/3I23SF3JkC