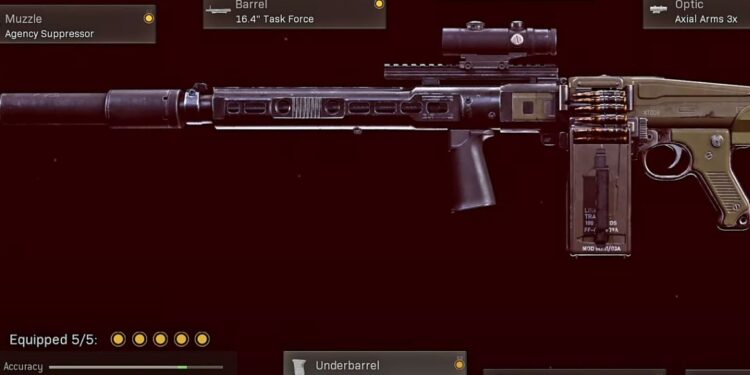 The best Warzone loadout for the new LMG, M82.

Although not every new season of Warzone shifts the weapon meta, it looks like there is a meta change in season 4 of Warzone.

The AMAX has received another nerf along with the Streetsweeper and there’s a few guns that have received a buff including the Scar from Modern Warfare and the Groza from Black Ops Cold war.

We also have new weapons including the MG 82. The description of the M82 is “Full-auto light machine gun. Highest fire rate in class with improved aiming speed. Moderate recoil and damage with increased ammo capacity”.

According to YouTuber JGOD, the MG 82 is probably the best weapon for long-range gun fights in season 4 of Warzone. Let’s take a look at the best class loadout for the MG 82 LMG.

The recoil for the MG 82 is extremely easy to control and with a fire rate of 916 RPM, this gun is king of the medium to long range gun fights. As with all LMGs, the downside to using this weapon is the slow movement speed and the reload time.

Here’s the best attachments to use for the weapon:

The agency suppressor provides the usual benefits including increased damage range, bullet velocity, sound suppression and help with the vertical recoil. The task force barrel will provide the MG 82 with a 50% increase in bullet velocity along with benefits to both vertical and horizontal recoil.

Field Agent Grip helps to reduce the recoil in the further and there’s no need to choose any other option apart from the fast mag for this weapon. You’re still getting 90 bullets in each magazine which is more than enough, and you’re getting the benefit of a much quicker reload time.

According to JGOD, the maximum bullet velocity for the Warzone MG82 is 1,175 with a 2,700 damage per mag. stat