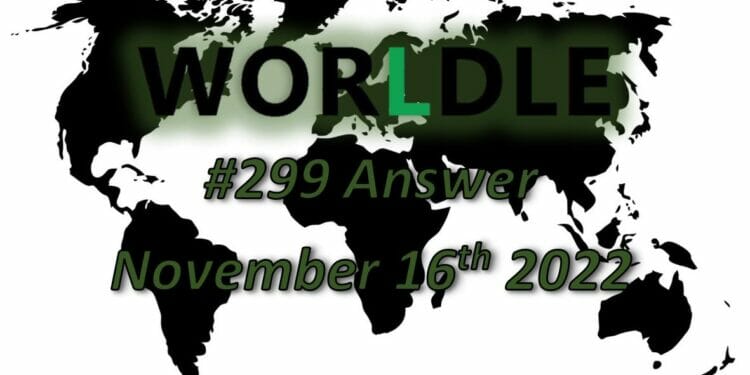 Here is the answer for the 299 Worldle country today, released on November 16th, 2022 and some hints to help you solve it.

UPDATE: Click here for the hints and the answer to Worldle 300!

Here is what the country/territory looks like for the Worldle 299 puzzle today:

The answer to the Worldle 299 country/territory today is…

It was founded on October 3. 1948. The country’s official name is DPRK, or the Democratic People’s Republic of Korea. If you happen to know much about their culture and way of life, their local name is Choson or “Choson-minjujuui-inmin-koughwaguk“.

North Korea, officially the Democratic People’s Republic of Korea (DPRK), is a country in East Asia. It constitutes the northern half of the Korean Peninsula and shares borders with China and Russia to the north, at the Yalu (Amnok) and Tumen rivers, and South Korea to the south at the Korean Demilitarized Zone. The country’s western border is formed by the Yellow Sea, while its eastern border is defined by the Sea of Japan. North Korea, like its southern counterpart, claims to be the legitimate government of the entire peninsula and adjacent islands.

What Are The Worldle 299 Bonus Answers Today?

There are three bonus rounds today and the first one is to guess the three countries that border North Korea.

The county outlines are shown to you and here are the answers to the countries next to North Korea below:

The second round is to guess the capital of North Korea.

The capital city of North Korea is…

The third and final bonus round is to guess the flag for North Korea. There are eight options for the flags, which can be seen below:

Its red stripe and star are symbols of the country’s commitment to communism, while blue is said to stand for a commitment to peace. The white stripes stand for purity, strength, and dignity. The flag was introduced on July 10, 1948, two months before the Democratic People’s Republic of Korea was proclaimed.

Let us know in the comments section below if you managed to solve the Worldle today and if there are any other games you want us to cover. Click here for the hints and the answer to Worldle 300!